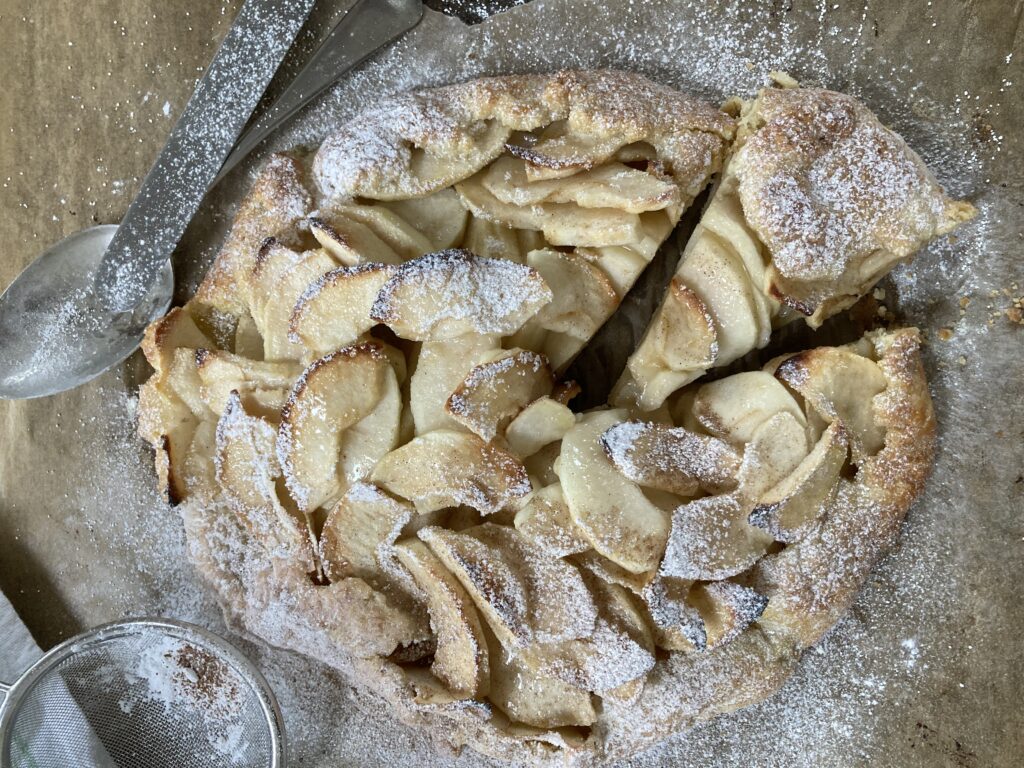 Although apples are available all year it is in Autumn when I think of cooking with them.  Laden apple trees in the early morning mist are a treat to behold and biting into a crisp juicy apple is the autumnal equivalent of a handful of Summer strawberries snaffled from the fruit cage.  We have several apple trees in the garden in varying stages of vintage and productivity.  Unfortunately late frosts this Spring did not suit some of the trees and one hasn’t produced a single apple.  The Bramley is usually my failsafe and I make lots of puddings based on its large generous apples that cook down to fluffy snow.  Sadly it is a little disappointing this year but one of the eaters has masses of fabulous, crisp and delicious apples.

Eating apples obviously cook in a different way to the Bramleys so I look to different recipes to make the most of their firmer flesh and sweet tang.  There couldn’t be a better way to showcase those qualities than this fabulous galette.  Sweet crumbly pastry that is the work of minutes (I promise) encases slices of apple.  Genuinely one of the easiest puddings to make, it comes into its own at this time of year and regular visitors to this site will know its close relation the plum galette.

I make this often, fruit based puddings being one way I can persuade myself (as if) it is ok to tuck in to a pud.  That this one is so genuinely full of apples means I have even turned a blind eye on occasion to it being breakfast.  What?

Generally I keep this fairly simple but if you want to go for an apple pie vibe then add a little ground cinnamon into the chopped apples or dust the cooked galette with some icing sugar combined with cinnamon.  You only need a teaspoon of beaten egg for the glaze so take it from another egg that is being cracked for another purpose if possible otherwise use milk.  The galette in the picture used four big, tennis ball sized apples and maybe there were a couple of slices too many, three would have been fine.  I don’t mind too much apple but let you know this as a guide.

A good pinch of fine salt

A teaspoon or so of beaten egg (see introduction)

A dessertspoon of demerara or caster sugar

Preheat the oven to 190 and put a baking tray into heat up.  Put the flour and butter into a medium size bowl and rub together with your fingers.  There isn’t really enough to justify getting a food processor out. When it looks like breadcrumbs add the salt and 30g of sugar followed by the water, bring it together into a ball, wrap in clingfilm and leave somewhere cool for half an hour.  Mix the sliced apples with the teaspoon of flour, remaining 30g of sugar and a squeeze of lemon juice.   Roll out the flour to a rough 30cm circle and place on a sheet of parchment, tumble the apples onto the pastry leaving a good gap and turn this pastry edge over the apples.  Brush with your glaze, egg or milk and sprinkle with the dessertspoon of sugar.  Carefully transfer the galette on its parchment paper to the hot baking tray and bake for 25-30 minutes until golden brown on top and crisp underneath.  Let it cool for a few minutes as the apples will be piping hot before dusting with cinnamon icing sugar if desired (see intro).