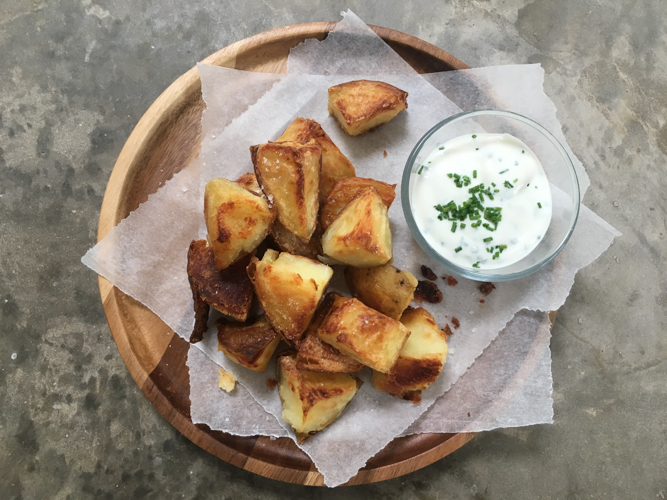 Occasionally it’s not so much a new recipe I need, more a hint or reminder of something. After all I have many, many cook books full of recipes but sometimes lack of energy, time or ingredients mean I’m looking for an old favourite rather than a new idea.

So yes, this is a recipe for roast potatoes but how often do you think of roasties aside from Sunday?  These are an absolute winner and get eaten ridiculously quickly whenever I make them.  Not just any old roast potatoes these are canapé potatoes or something else for a mezze type lunch potatoes.   Pimp them up if you wish, a good dusting of paprika or chilli flakes would add pep and a handful of rosemary always works but I like them just like this, with salt and their tangy, chive and yogurt side.

I guess they are a little like potato skins – I know you can make these by baking potatoes and then removing the fluffy contents leaving you with the skins to roast and crisp but I never have.  I do however like the combination of crispy crunchy potatoes with a sour cream and chive style sauce.   This then is my way of doing things – you get the crispy skins but also the fluffy interior and I’ve gone for a yogurt based dip, similar but a little lighter and tangier than the original.

Sometimes I serve these alongside a main course but more often they are offered in their own right – a starter or a grazing treat to go with drinks before lunch or dinner.  A little dish of sriracha alongside offers that heavenly combination of the cold and creamy yogurt with a belt of chilli heat.  It’s not a spanking new fangled recipe, just the re working of an old favourite.

This is easily doubled or trebled which I would highly recommend.

A handful of chives, finely chopped

Preheat the oven to 200.  Cut the potatoes into chunks about the size of a large walnut.  Put into a large pan of salted water, bring to the boil and simmer for 10 minutes.  Drain really well, shake briefly in the colander and then put into a large roasting pan, add enough oil to just coat, turning the potatoes well.  Sprinkle with salt and roast near the top of the oven for 40-50 minutes until deeply golden and crunchy at the edges.   Meanwhile mix the yogurt, chives and a good pinch of salt and let down with a little water if you prefer a runnier dip.  Mix in the garlic if you are using.   Serve the potatoes on a large plate with the dip and perhaps some sriracha along side.   Serves 3-4 as a snack. 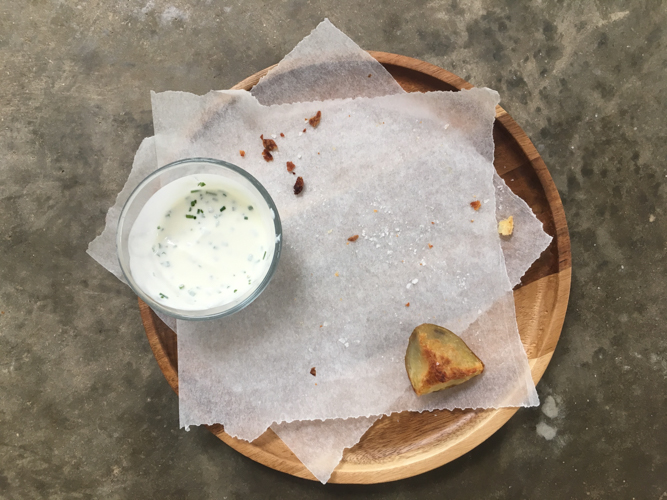