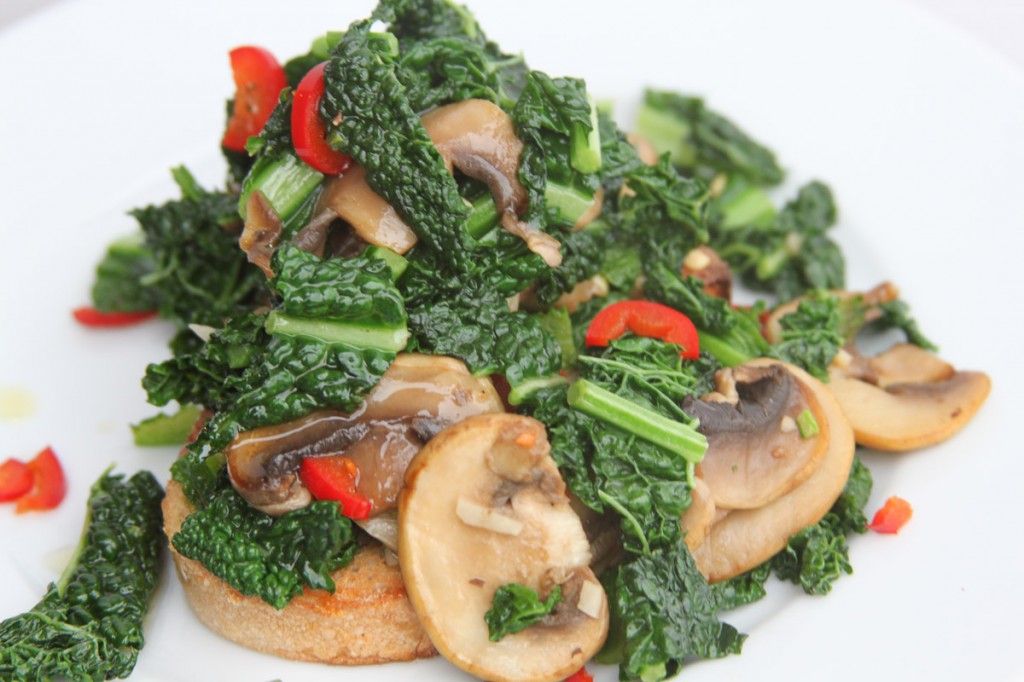 I was in the farm shop yesterday and spotted some cavolo nero, that beautiful dark green Tuscan kale and it reminded me of a regular lunch last winter.  One day the clock was ticking towards lunchtime and the fridge was pretty bare – kale, mushrooms and chilli on toast was the unexpectedly rewarding result.  As ever with kale you feel it is really doing you good, the chilli adds further pep.

Kale is a funny old vegetable, fresh and invigorating but can be a little bitter.  It came as no surprise to find my children weren’t that keen when served kale simply steamed so I had to find an alternative (I am trying to find a way to make every vegetable if not delicious then at least palatable to my two).  Having heard about kale crisps I thought I would give them a try.  Bingo – even my daughter who would normally recoil in horror at anything cabbagy loved these and indeed there was the usual argy bargy for the last crisps in the bowl.  All you do is turn some chopped curly kale in a little olive oil, spread on a baking sheet, sprinkle with a little sea salt and bake at 200 for 10 minutes.  It becomes crispy, savoury and deeply moreish.

Kale, Mushrooms and Chilli on Toast

2 handfuls of kale, curly or cavolo nero, chopped up

Olive oil, plus some extra virgin olive oil for a final dressing

Put a tablespoon of olive oil in a large frying pan or wok over a medium heat.  Add the mushrooms and cook until soft and a little coloured.  Add the garlic and chilli, stir and then put in the kale.  Continuing stirring until the kale wilts a little.  Put the slices of toast onto two plates and divide the kale and mushrooms between them.  Season with sea salt and pepper and a final, generous trickle of really good extra virgin olive oil.  Serves 2. 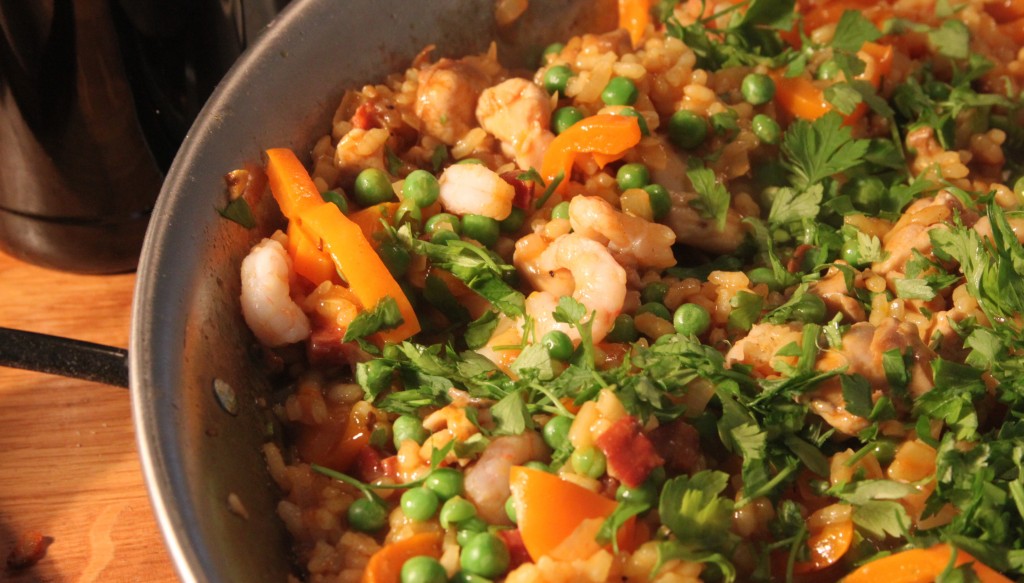 Many, many years ago, I went on holiday with best mate Kate and her parents to Spain.  It was in those heady single days when the most important factor on holiday was to get a good tan.  Very little else mattered much although eating well probably came a close second.  Funny how these two things would be entirely the other way round to me now.  I remember it as a happy, sunny lazy holiday and feeling a million miles away from London and work.  One evening we went out for supper along dark winding roads, occasionally encountering that often slightly crazy driving adopted by the locals until finally we came to what was little more than a shack on the sand – we had arrived at Fred the Beach.  We were invited into the kitchen, we studied the specials but there was only one thing to order, one very special reason for the trek to Fred’s – the paella.  It was sensational – proper, authentic, truly delicious paella.

Quite something to live up to then.  Fortunately I can’t remember the precise ingredients so recreating it exactly is not an issue, only that I loved every mouthful.  Paella is a regular with us and goes down very well.  We had a family over for lunch recently and when one of the little girls saw the paella on the table she announced she would not be eating it, only to have three helpings.

Whilst it may not seem the obvious choice for January, as I am not going to cook it outside over wood but inside on the hob, the weather and season make no difference. It is a superb one pot number full of thoroughly yummy things and perfect for a weekend lunch.

I have it in my head, erroneously or not, that paella is either inland or coastal, that is based on the ingredients found in either location.  Prawns, mussels, squid for the beach version and chicken, rabbit, snails for the inland.  The recipe that follows, I am afraid with total lack of regard for authenticity, marries the two containing as it does both chicken and prawns.  As I said, I am not recreating Fred’s masterpiece, just making something we all like to eat.

In a large frying pan or paella pan saute the chorizo, add the olive oil and the chopped onion and pepper and cook until soft.  Add the garlic, paprika rice and chicken and stir to mix it all together.  Make the stock so that it is very hot and add the pinch of saffron to it.  Now add the wine and the stock, put the beans on top and push them down slightly under the surface.  Leave to cook for 20 minutes without stirring until all the liquid has been absorbed and the rice is cooked.  Add a bit more stock or water if it seems to need it.  Put the prawns on top and again, push them just under the surface, cover the pan with a lid or foil and leave for 5 minutes.  Sprinkle with the chopped parsley and serve, with some lemon wedges to squeeze over if you like. 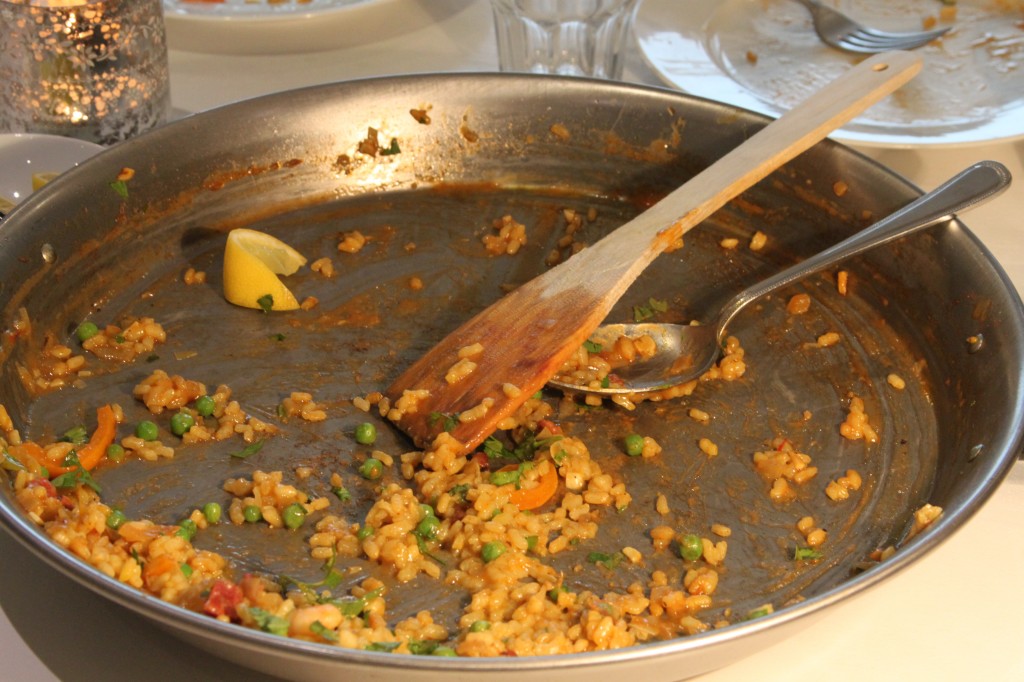 I bought some green beans for this but forgot what they were for and gave them to the children for tea the previous day, thus you see peas which were absolutely just as good. 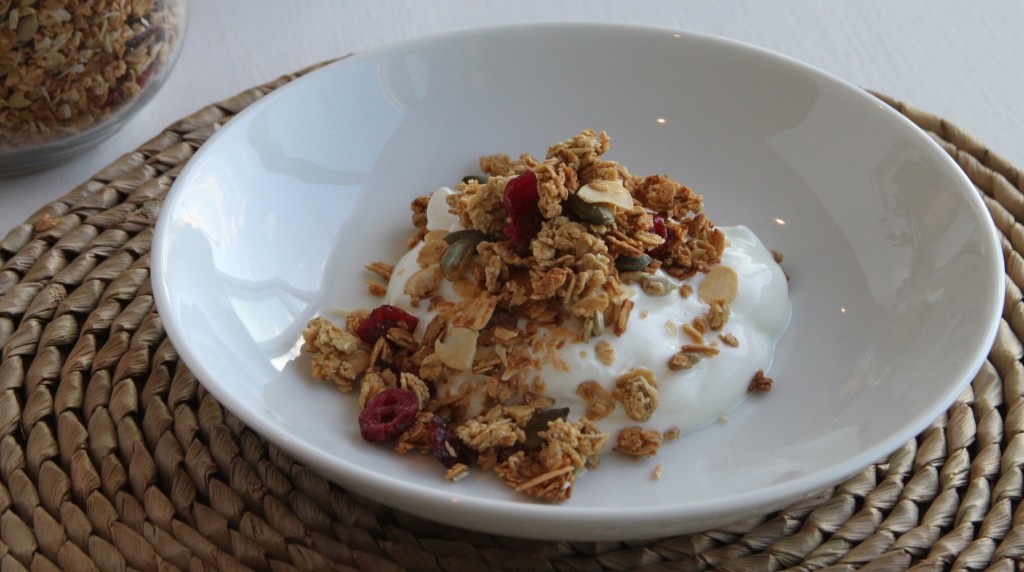 You may have read my previous comments on breakfast (Pudding for Breakfast, October 2012), my tiring of cereal and looking for alternatives.  This situation reared its head again late last year when our chickens slowed down on their usually reliable egg laying.  I believe they need a certain amount of light each day in order to be productive and so, suffering from some sort of avian SAD, the girls were no longer managing their full daily quota.  My boiled egg breakfast was put on hold and an emergency replacement had to be found.

Enter my granola which I used to make and had rather forgotten about.  Crunchy, nutty, seedy and oaty it has zipped to the top of the hit parade once more and even, with the addition of dried cranberries, featured as our Christmas Breakfast.  On top of Greek yogurt with or without a chopped banana it is a rocking start to the day.  I feel happily full until lunchtime and even better, the whole family love it.  That said my son has it without nuts and my daughter has it without seed or nuts.

Whilst it is undeniably a little sweet, it isn’t loaded with refined sugars, nor with salt or preservatives (and other unknowns) so it must score pretty high on the healthy scale.  We have kept the dried cranberries that denoted it as our Christmas Granola but you could easily substitute raisins or chopped dried apricots.  The seed and nut combination below is what I use but as ever, you can customise this to your tastes.   One more thing, there seem to be various grades of maple syrup, one of the cheaper ones would be fine here.

Preheat the oven to 150.  Mix the first eight ingredients thoroughly in a bowl.  Spread over two baking sheets and put in the oven for 10 minutes.  Remove from the oven, split the coconut between the two and give it all a good mix.  Return to the oven for a further 10 minutes.  Once golden, remove and allow to cool.  Add the cranberries and put into an airtight jar or tin. 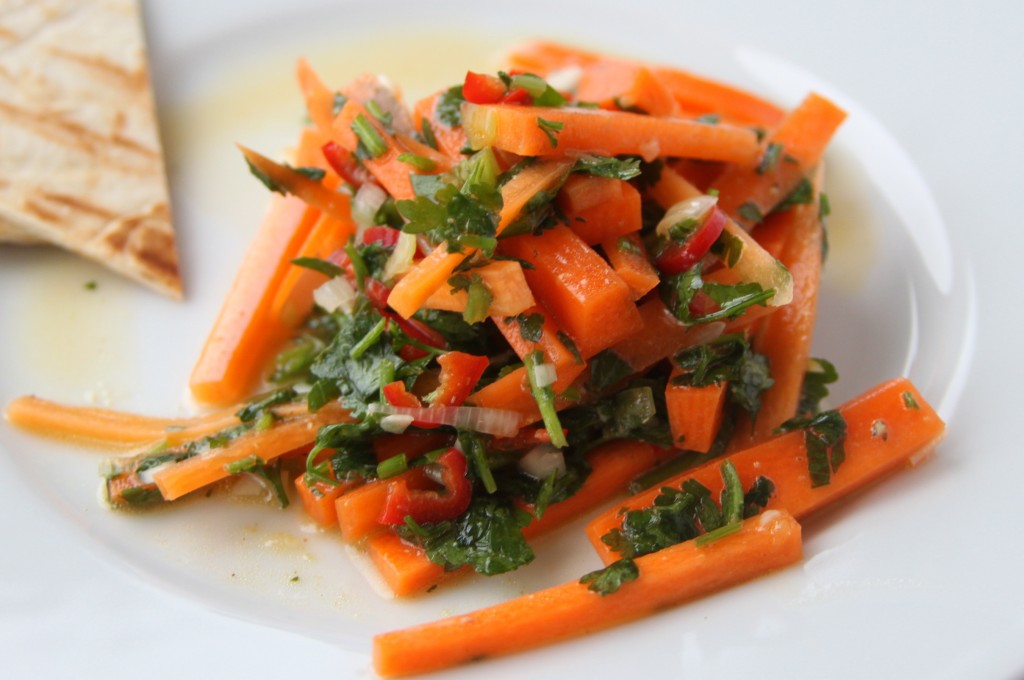 I am always pretty excited by the New Year.  Rather like the feeling of opening a new book, clean and fresh, not knowing what is in store but with the hope of something fulfilling.  Of course Spring, which I love, is a while away but I know it is out there and I am already looking forward to the new green leaves, the tiny shoots and buds and a bit more sun.

In the same way that I don’t know what the new year holds, I don’t know whether this January will be the one when I actually do lose a few pounds.  Although I only had two slices of Christmas cake and five or six mince pies, some of my clothes are feeling a little snugger than they were.  To the point in fact that a pair of jeans literally fell apart whilst I was wearing them last week (sitting on the sofa in case you wonder, not doing anything strenuous).  So if ever there was a hint from my body to me, this was it.

What I do know however is that I won’t be following some diet that restricts me to four bananas a day and nothing tomorrow, or only protein one day and vegetables the next.  I want to eat food that is healthy and delicious but relatively normal and also, family inclusive.  I can’t be doing with one thing for me and another for the children.  Surely it is good for us all to indulge in more crunchy, colourful salads, vegetables in a way we all like them (easier said than done chez May) and fruity puddings.

First on my list then is this zingy carrot salad that will awaken any tastebuds feeling jaded after the party season.  It is raw, fresh and crunchy, quick and cheap to make and deeply moreish.  Having made some today I am now going to roast a chicken for supper so we can then have cold chicken and carrot salad tomorrow for lunch and I am already looking forward to it.

2 large carrots, around 300g, peeled and cut into matchsticks

Juice of one lemon

In a medium bowl mix the oil, lemon juice, cumin, salt, sugar, chilli and garlic together.  Add the carrot, spring onion and parsley and/or rocket and give it a good stir.  Leave for half an hour before eating stirring several times.  Taste in case you need a squeeze more lemon or seasoning.   Serves 2-3.