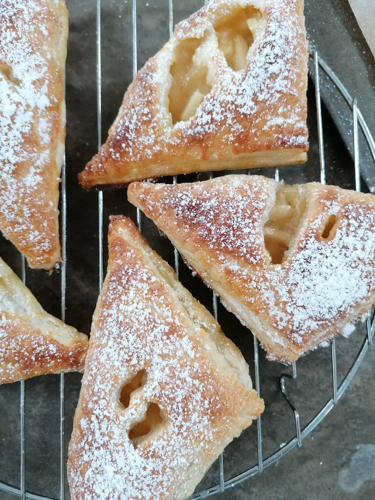 If pushed I think an apple would my choice if only able to eat one fruit ever again.  I love summer berries and would find it particularly difficult to cast aside juicy raspberries or fragrant, almost scented, wild strawberries but an apple would pip them all to the post.  Not only is it hard to beat the juicy, tangy crunch of a perfectly ripe apple but they work so well in all manner of recipes, both savoury but particularly sweet that one might never become bored.  Lacking the glamour of blowsy, vividly coloured summer fruits they are more the sensible prefect of fruits – jolly reliable and a proper all rounder.

Lucky enough to inherit a collection of apple trees when we moved here and having subsequently added to our small orchard, now is the time of year when we are spoilt.  Various eaters and a hugely prolific Bramley mean apples feature on our menu several times a week.  The turnovers in the photograph were an after school treat at the end of last week and a simple form of apple strudel hit the table for pud on Sunday.  A bowl of stewed apples alternate with plums to accompany granola and Greek yogurt for breakfast and an apple crisp is on the cards for supper tonight.

There are apple pies of course and crumbles (try my Apple and Raspberry Crumble, October 2015), elegant apple tarte fines, apple cobblers, crisps and Betty’s.  Grated apple works a treat in a treacle tart to soften that super sweet hit and I like it mixed with mincemeat for a slightly less rich and more tangy pie at Christmas.   My super easy Tarte Tatin (January 2019) enjoys regular outings here as does the Crunchy Apple Pudding (January 2015).  The sharp apple makes a perfect foil to sweet pastry and oaty crumbly toppings;  it melds perfectly with cream whether straight or in the form of ice cream or custard which is why it makes so many appearances as a pudding.  Apples and cinnamon?  A life long love affair and a little tangy apple works amazingly well in cinnamon buns.

So make the most of wonderful apples.  We grow them here and right now you can enjoy them super fresh without having travelled a thousand miles or languished for months in cold storage.   Check out farm stalls and farmers markets for locally grown and unusual varieties – above all make a delicious apple pudding – with all that fruit under the crumble, well its almost health food. 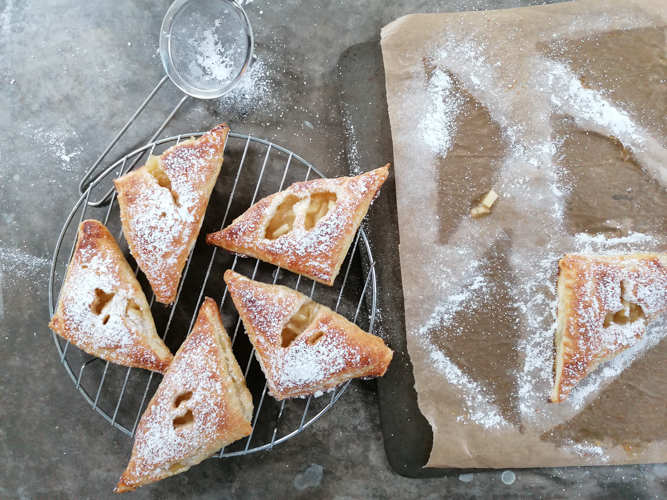 These are a little different to the filo wrapped turnovers I wrote about in Turnovers and leftovers (October 2016).  Not only do these use puff pastry (as that is what I had to hand) but they also combine cooking and eating apples.   This means you get the fluffy Bramley which breaks down to a fluff along with small pieces of the eaters which retain a little bite.  The strudel I mention in the introduction was essentially a large, long turnover using the other half of the pack of puff pastry.  It was eaten before I could take a photograph.

A couple of tablespoons of water

Milk or a little beaten egg

Preheat the oven to 200.  Put apples, sugar and water into a large pan and cook gently until the Bramley has broken down and the eaters have lost their crispness.  Taste, you may need a little more sugar and when you are happy with it leave to cool.  Roll out the puff pastry on a lightly floured surface into a rectangle and cut into six squares.  Put a tablespoon of the apple onto one square of pastry, sort of in the right angle, brush the edges with milk or egg wash and fold over to make a triangle pressing the pastry well to seal, use a fork if you like.  Repeat with the other 5 and put onto a parchment lined baking sheet.  Brush a little more milk or egg over the triangles, sprinkle with caster sugar, cut a couple of slits in the pastry and bake for 12-15 minutes until puffed, bronzed and crispy.  Allow to cool a little before dusting with icing sugar if you like.  Makes 6 and depending on the size of the apples used you may have some apple left which would be delicious for breakfast… 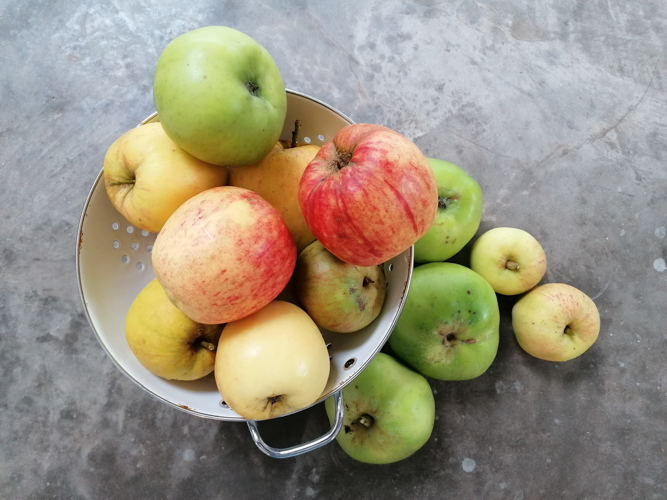