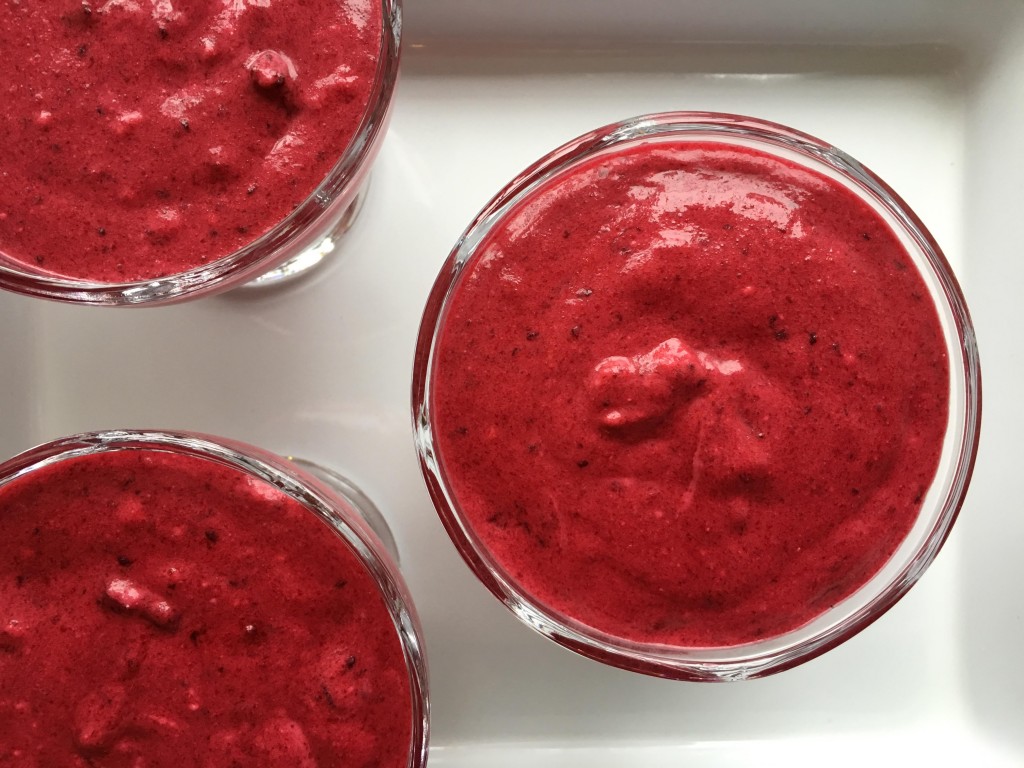 What? you cry, what is going on?  Blackcurrant Mousse in January?  I know, crazy though it may sound that is indeed the recipe for today.   I am usually one to bang the gong  for seasonal produce and wouldn’t dream of buying Peruvian asparagus or the suchlike at this time of year.  That said the sky was grey and gloomy last week, the ground squelchy with the mass of recent rain and I felt we needed a blast of sunshine, a promise of summer.

After discussion I found that my children were also keen for a break from my repertoire of apple puddings of which I am so fond at this time of year, the endless array of apple tarts, pies, crumbles, turnovers and strudels was wearing a bit thin.  I knew the last of the blackcurrants we picked in the summer were languishing in the freezer plus a bag of raspberries kindly donated by lovely Hayley when ours had produced their last.

So it was based on these various factors that we ate mousse upon mousse last week.   The first was the raspberry version, mouth puckering in its tartness with that amazing raspberry fragrance still present in abundance.  The second version was the blackcurrant, heady with the smell of blackcurrant leaves and packed with fruity deliciousness.  My bubble was pricked somewhat by my children not liking the bits of fruit I had added to give a little texture, you might want to go the totally smooth route if this complaint resonates with you.

I highly recommend you try one if not both of these puds – whilst I wouldn’t buy fresh berries at this time of year, too well travelled and too expensive, I think frozen fruits are a saviour in the chillier months.   Raspberries, blackcurrants, forest fruits, mixed berry – the choice is up to you.

I had 500g of raspberries but only 478g of blackcurrants – it didn’t make a dot of difference so don’t get too hung up on it if you are a little short of one or the other.

Put the berries, sugar and water and cook over a gentle heat until the sugar is melted and the fruit broken down.   Pass the fruit through a sieve into a bowl.  Meanwhile soak the gelatine in a bowl of cold water until completely soft then add it to the warm fruit puree, stir well and leave to cool, giving it the odd stir.  If the fruit puree had cooled completely you will need to warm it a little before adding the gelatine as this needs to melt.

Whisk the egg whites until stiff and then using the same beaters whisk the cream (in a separate bowl) until it just holds its shape.  Don’t do it the other way round or the cream residue will stop the egg whites whisking.   Gently mix the egg whites into the fruit mixture followed by the cream.  It will still look rather runny and unpromising but persevere.  Pour into dishes or glasses and chill for at least 4 hours.  Serves 4 generously but could stretch to 6.