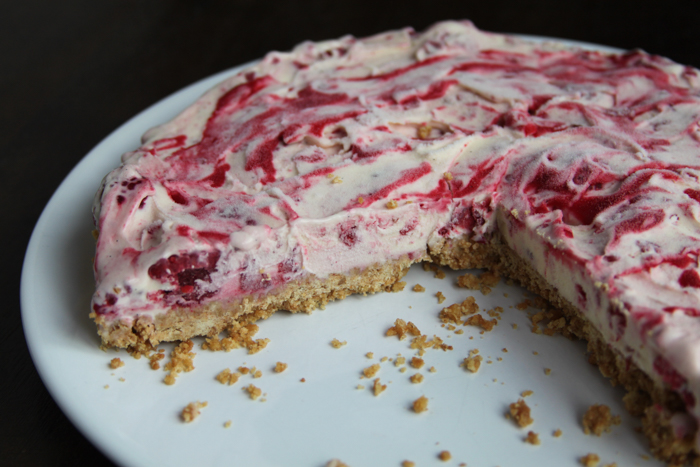 Barely even a recipe this requires very little effort and few ingredients.  Just a determination to make a pudding with not much to hand.  Raspberries and ice cream from the freezer and a pack of biscuits from the cupboard – I used digestives but you could happily use shortbread or ginger nuts.  Equally whilst I only had vanilla ice cream available this would be fabulous with chocolate ice cream.   A bit of bashing and mushing results in a pud that far exceeds expectations and made use of whittling lockdown provisions.

Take the ice cream from the freezer and let it soften while you get on with the biscuits.  If your raspberries are frozen do the same with them.  Bash the digestives to crumbs in a bag, mix with the melted butter and put into a 20cm loose bottom tin.  Mash 100g raspberries with the icing sugar and swirl into the ice cream, add the whole raspberries and pour the whole lot onto the biscuit base and freeze for an hour.  This will serve as many, or as few, as you choose. 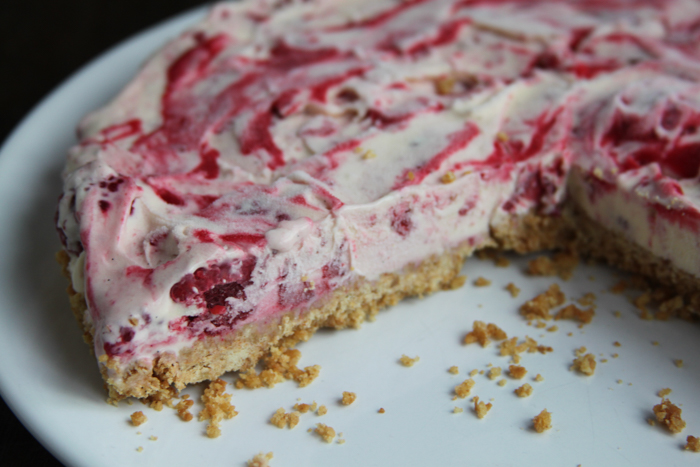 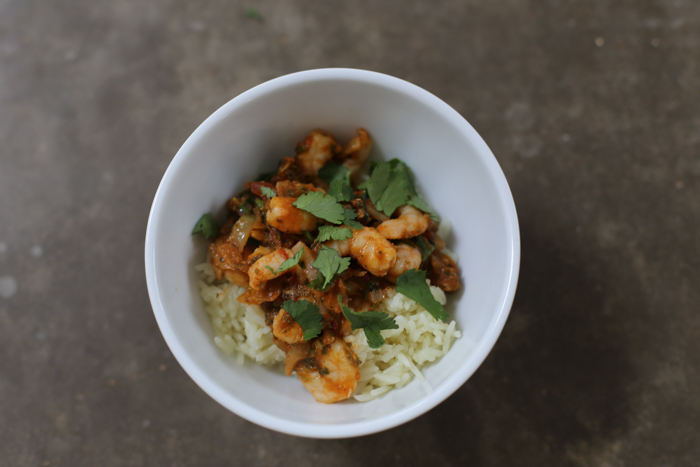 The glorious weather of last week has given way to rain.  It seems endless but has only been three days, I think we had been spoilt with a surprisingly hot April.   As often is the case with dreary grey skies I feel the need for a blast of sunny, vibrant flavour and a chermoula paste is an obvious contender.   Full of fresh herbs, zesty citrus, spices and a little heat this is a wonderful and quick way to add massive flavour.

Due to a slightly erratic lockdown larder I have made some comprises to my usual recipe but this version was deemed so good it had to be shared.  In the normal run of things I would use a fresh chilli but have used cayenne pepper instead for heat.  I used a 1/4 teaspoon but feel free to reduce this to a pinch.  Ideally I would also have had more prawns for the four of us but the freezer only yielded 250g.  You can of course use fish or chicken in place of the prawns if that is what you have.   We had this with my go-to pilaff but I would be just as happy to serve the prawns and their punchy sauce on a slice of toasted sourdough.  As ever these days its all about using what you’ve got.

Heat the first tablespoon of oil in a large frying pan and cook the onion gently until soft but not coloured.   Whizz the remaining ingredients apart from the tomatoes and prawns in a small food processor, with a hand held blender or chop by hand.   Mix a tablespoon of the paste with the prawns and add the remaining paste to the onions along with the tomatoes and a splash of water.  Cook for a few minutes before adding the prawns and cook until they turn from grey to pink.  Serve sprinkled with the extra coriander.  This would be masses for 2 with rice and was actually enough for the 4 of us with some other things for lunch. 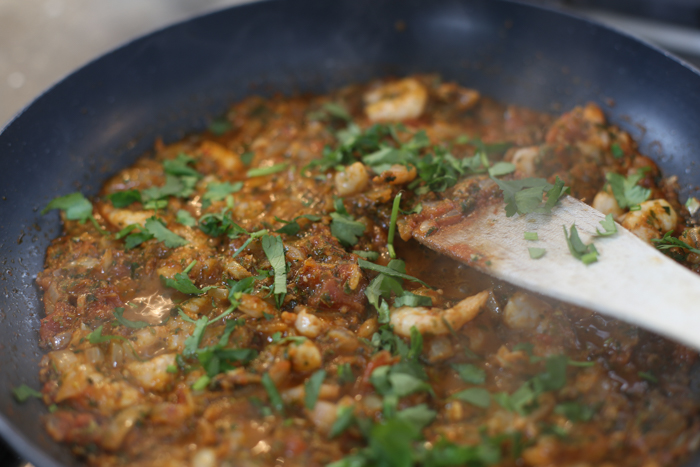