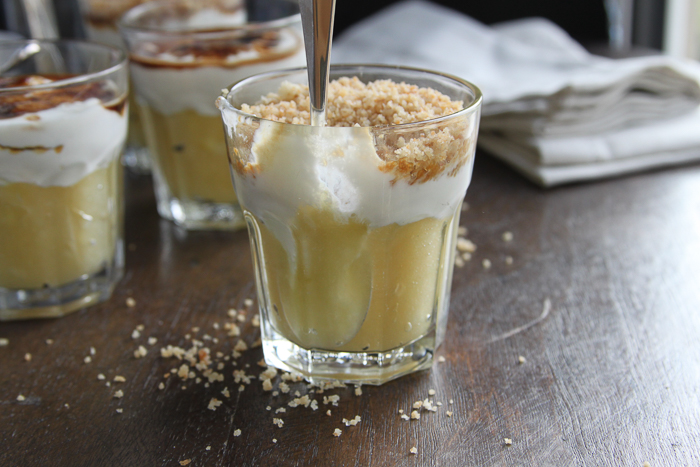 I couldn’t countenance Sunday lunch without a pudding.  I fully admit there have been times when a quickly whisked together chocolate or butterscotch sauce to pour over good ice cream has been all I could muster but puddings they were nonetheless.  I love all manner of rib sticking, warming treats – after all Sunday lunch only comes around once a week and I will easily go days or the whole week without any other sweet, sticky number for afters.  Golden syrup sponge, lemon (or chocolate) surprise pudding, a fruit crumble, pie or galette – anything that will be delicious and only improved by cold cream or warm custard.

Last Sunday though I had rather gone to town with a main course of braised silverside and many, many vegetables.  So, although I had bought bramleys and had apple crumble with cream firmly, and fondly, in mind a bit of rejigging was in order.

Several years ago I was offered a pudding called Danish Peasant Girl in a Veil.  Seriously, that was the name – I am sure because I had to ask at least four times.  Caroline, who made it, assured me that just because I hadn’t heard of it didn’t mean it wasn’t a real dessert…  It was layers of apple puree, crispy breadcrumbs, whipped cream and grated chocolate and extremely good it was too.  It has sat filed in my memory until now.

I decided to combine the spirit of the Danish girl with an old nursery pudding of dark muscavado ‘melted’ on top of Greek yogurt which in turn covers some fruit.  So here we have it.  A lighter take or a (rather early) summer version of apple crumble with cream.  My husband and children loved it although I think I am the biggest fan.  Next time I am going to make more so I can also have it for breakfast. 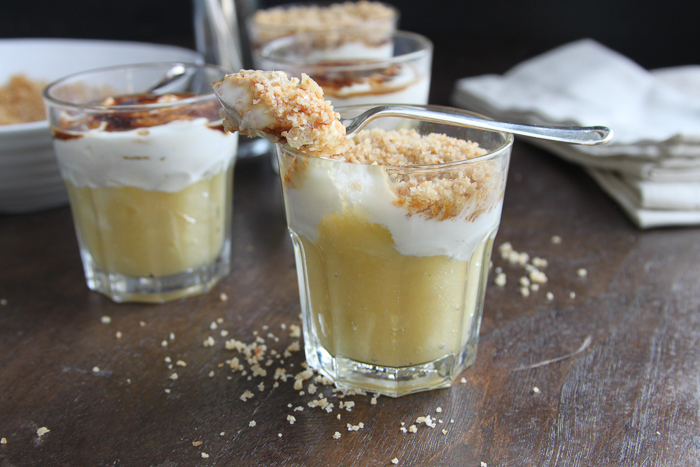 I have given measurements but these are flexible, if your apples weigh 1kg then great, you will have a little more puree just adjust the sugar accordingly.  Likewise use more yogurt if you like, these are just guidelines.

Put the apples, sugar and water in a pan and cook slowly until completely broken down.  Taste, you may need a touch more sugar depending on the sharpness of your apples.  Leave to cool.  Meanwhile melt the butter in a frying pan and add the breadcrumbs, sugar and a good pinch of salt.  Mad though it might seem you need the salt to give flavour so the crumbs don’t just taste sweet.  Fry these gently for 10 minutes, stirring occasionally until golden and crunchy then leave to cool.  Once you have all the components you can assemble your puddings.  Divide the apple between the glasses and top with the yogurt, sprinkle the muscavado between the four glasses and leave it for a few minutes to ‘melt’ then cover with breadcrumbs.  You can do more layers if you like, I am not dextrous enough to do many, neatly and I only want breadcrumbs on the top so they are really crunchy.  This makes enough for 4 glasses but is easily doubled. 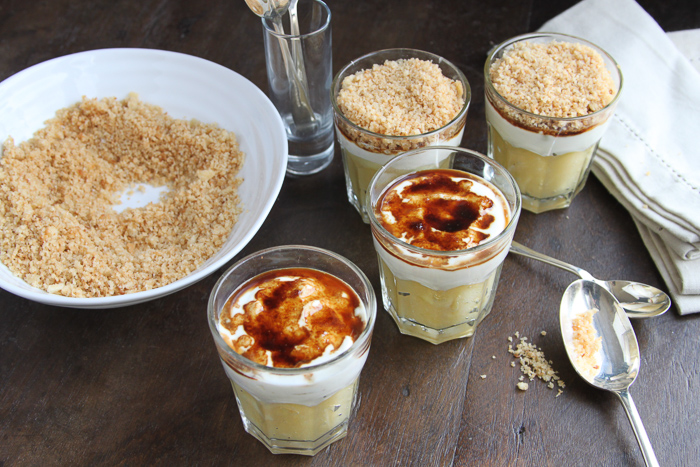