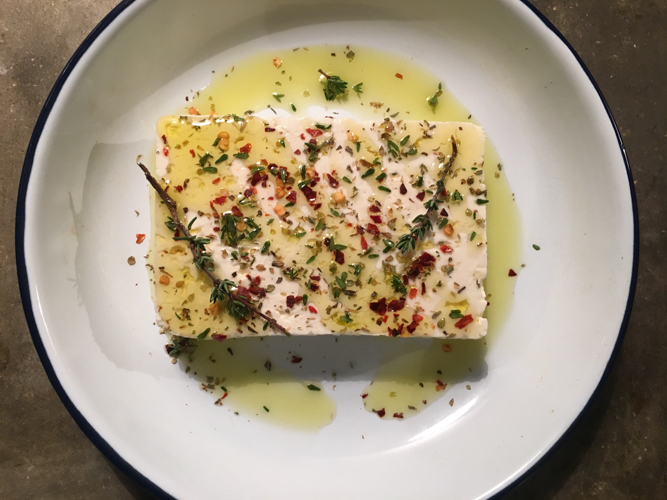 Tapas, mezze, picnic, however you refer to this style of eating I loved putting a load of different dishes on the table to pick at. Whether as lunch itself or simply a couple of things to whet the appetite before the main event.   You will find many such recipes on these pages Cheese Gougeres (November 2016), Moutabal (February 2017), Artichoke Crostini (March 2013), Grissini with Rosemary (May 2015) are a few.  More often than not the little plates I serve are vegetarian and it has often been a good way to entice my children to try something different.  Rather than being faced with an entire supper of something new and unfamiliar – this is an opportunity for them to try something whilst knowing there is a myriad of old favourites to tuck into at the same time.

I am a little ambivalent about feta.  If it is mild I am happy to tuck in, enjoying its salty edge.  Too strong or mature however and it ventures into that hirsute, goaty thing that I struggle with.  In this recipe use whichever type of feta you prefer – you can even find feta style cheese now that only contains cow’s milk.

This baked feta graced our table on Saturday evening amongst some other goodies.  I served it with homemade little tortilla chips (don’t panic the chips are homemade not the tortillas – find the recipe in Girls’ Night In, February 2014) and this was the first empty plate, it literally disappeared before my eyes. Warm, soft, salty with a bite from the chilli – this could be one of the most moreish things I have eaten.

Now this is a winning get out of jail free card if you need a last minute canapé or snack to go with drinks.  The warm soft feta has a completely different character to the cool white chunks more familiarly seen in Greek salads.  It takes on a delicate squidge that is enormously inviting and along with some chilli flakes and a sprinkling of herbs is the perfect mouthful to scoop onto a pita or tortilla chip. Packs of feta last for ages in the fridge and along with some hardy herbs you may have weathering the winter storms and chilli flakes in your cupboard you are all set.  Sometimes I add olives to the dish before baking, it depends whether I have any to hand and its very good either way.

Feta with Chilli and Herbs (or Olives)

The ingredients that follow are what I tend to have on hand and therefore what makes this a store cupboard saviour.  You can use chopped fresh chilli if you prefer and even pickled chillis for a different but very delicious vibe.

1/4 – 1/2 teaspoon dried chilli flakes, depending on how hot you like

A couple of sprigs of fresh thyme

Preheat the oven to 200.  Put the feta in a small ovenproof dish, sprinkle over the chilli and thyme, drizzle with oil and add the olives if you are using them.  Bake in the oven for 15-20 minutes until soft but not collapsing.  Serve with homemade pita chips, tortilla chips or whatever you like. 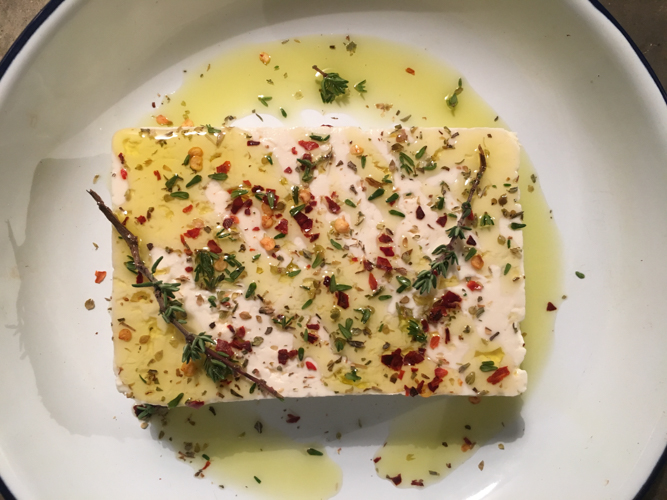 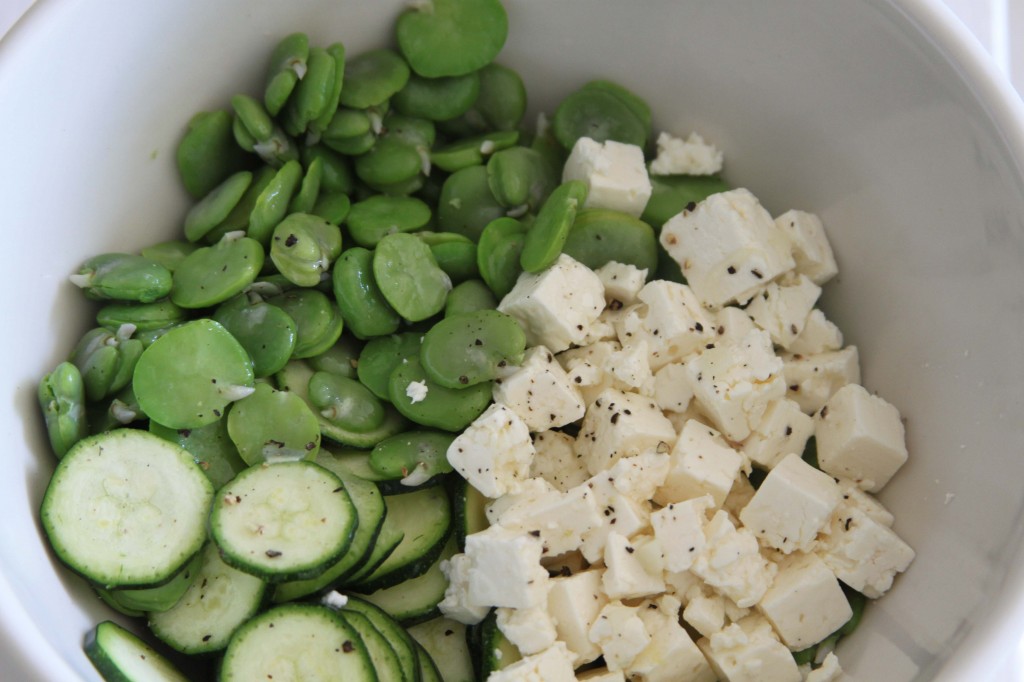 I know I say that every new salad I make is my new favourite but truly, this is.  I must have made it six times in the last two weeks and still show no signs of getting bored.   Crunch from little new courgettes go amazingly well with the glorious double podded emerald green beans.  A flurry of snow white tangy, salty feta along with a lemony garlic dressing brings the whole thing together with a boom.   Completely fresh and seasonal and got to be good for you, what is not to love?  I implore you to make this while the courgettes are small and the beans are around.

Broad beans might not be everyone’s cup of tea when single podded and served in their sometimes tough, grey outer jackets.  This I would concur with, a reminder of school lunches, both chewy and a little bitter.  Unrobe them further however, reveal that stunning inner green and you are in for an absolute treat, a true taste of the English summer.

I admit you need quite a pile of pods to end up with 200g of the inner bean but it is a job I enjoy, sitting at the table releasing each bean from its cosy padded sleeping bag.  A gin and tonic would be the ideal accompaniment to this task and reminds me of sitting with my granny podding beans recently picked from her garden (she had the gin in those days obviously, not me).    Granny’s kitchen garden was one of my favourite places in the world and although its been many years since I was there I remember the rows of vegetables like it was yesterday.   My first taste of asparagus, artichokes and fennel came from here along with beans of all variety.  Fruit trees in one corner offered regular treats when I was wandering around and the strawberries and raspberries further delights if I could negotiate the netting on the fruit cage.  It was a dreamy place and the excitement of picking fresh produce has never left me.

You will see feta mentioned again and I admit it finds its way into a lot of my salads.  If you aren’t keen on it though a little labneh (simply drained yogurt) would be a perfect, less salty alternative or some fresh ricotta (Herby Ricotta, September 2014) a delicious addition. 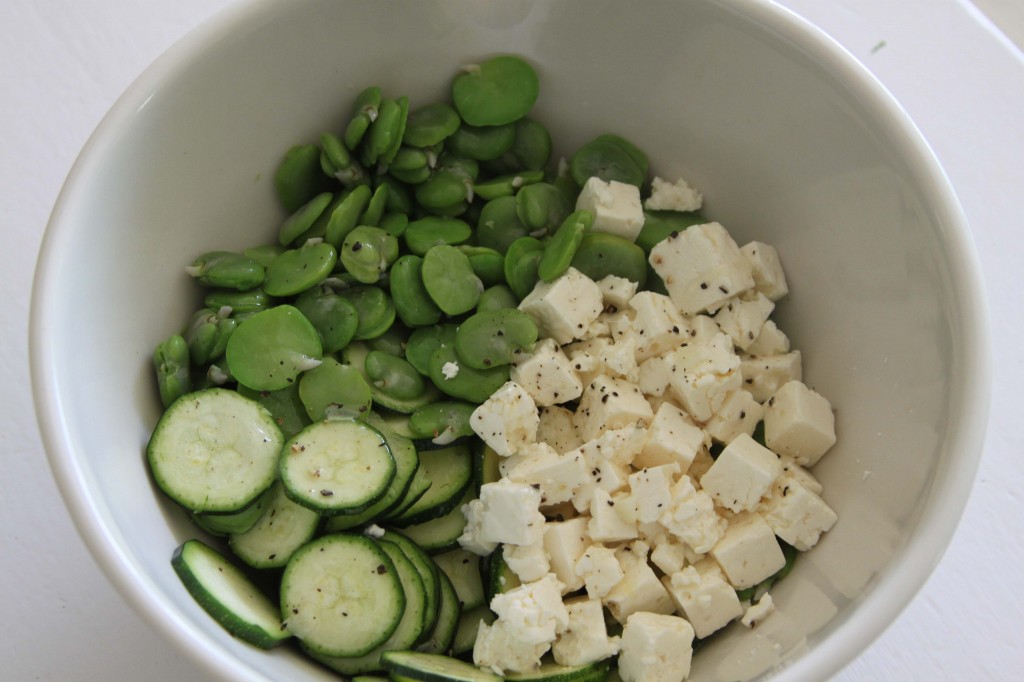 Finely slice the courgettes and put into a bowl.  Blanch the beans in boiling water for 2 minutes then drain and run under cold water and drain again.  Mix the garlic with the lemon juice, olive oil and salt and pepper, taste and check you are happy with the seasoning but bear in mind the feta can be quite salty.  Turn the courgettes in the dressing and make sure they are well covered then add the beans and feta and mix the in gently, sprinkle with herbs and serve.  Enough for 4 alongside other things or 2 on its own. 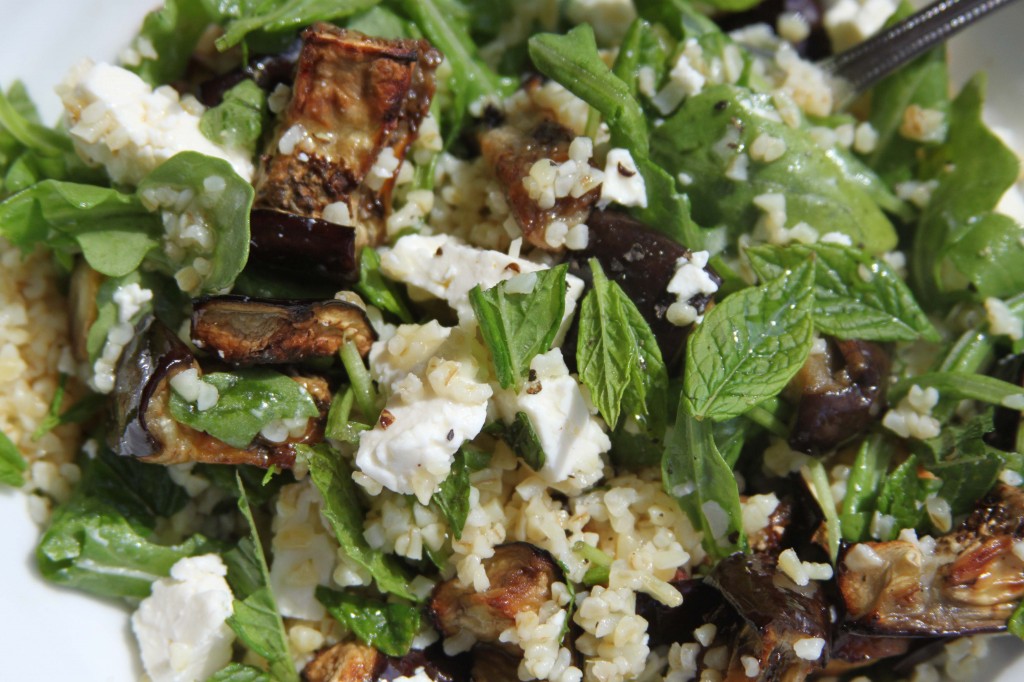 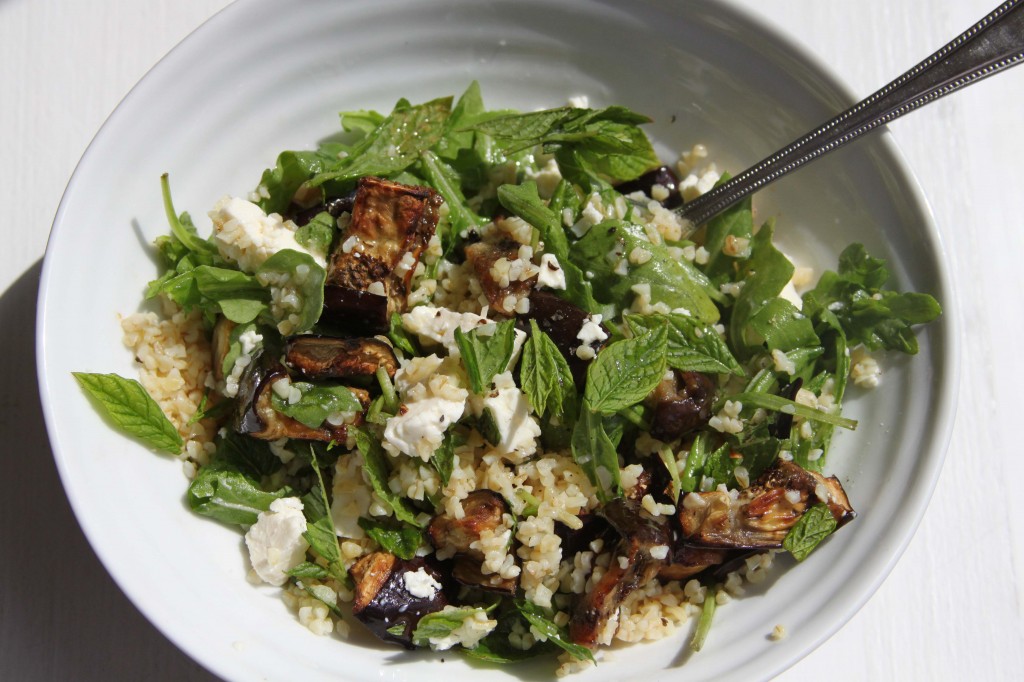 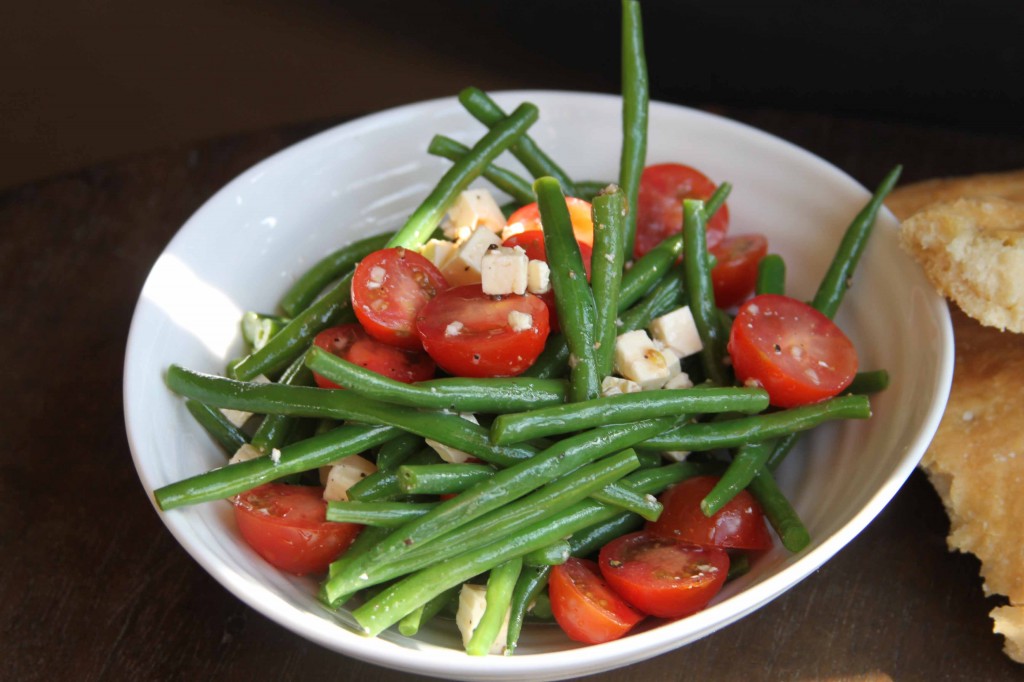 I am very keen on the whole family eating together and of course eating the same thing,  I might have mentioned before that I am not a big fan of “kid’s food” and who needs it. Be adventurous, there are so many delicious things to try and honestly who wants the headache of cooking lots of different dishes?  That said, it is not always plain sailing to keep the customers happy.  One of my children is currently off pasta, rice (except Paella – how does that work?) and sausages, neither like mashed potato and the other doesn’t really go a bundle on many vegetables.  I am nothing if not determined however and this salad suits everyone.

The crisp beans with sweet tomatoes and salty feta go together unbelievably well. I can’t quite say perfect marriage, too many contenders but that sort of thing.   My daughter loves the beans because of the garlicky dressing and the feta (but not the tomatoes), my son loves the beans and tomatoes (but not the feta) and I love it because the bowl is always empty.  I often serve this with roast chicken or lamb and it is one of the sides I am most likely to make to go with a barbecue.   It is a perfect solitary lunch or supper, quick, easy (so simple I am almost embarrassed to put it up as a recipe) and cheap too.

A twist on this and particularly good with chicken or fish is to lose the feta and have loads of garlic, lemon (zest and juice) and parsley or dill along with some black olives.  I do alter the components depending on who is eating the salad and would usually add olives the version you see in the photograph.

I served this, as you can see in the picture, with some focaccia which is simply the wild garlic one I wrote about in May but now that the wild garlic is over I use a regular good olive oil on its own but you could easily whizz up some other herbs if you like. 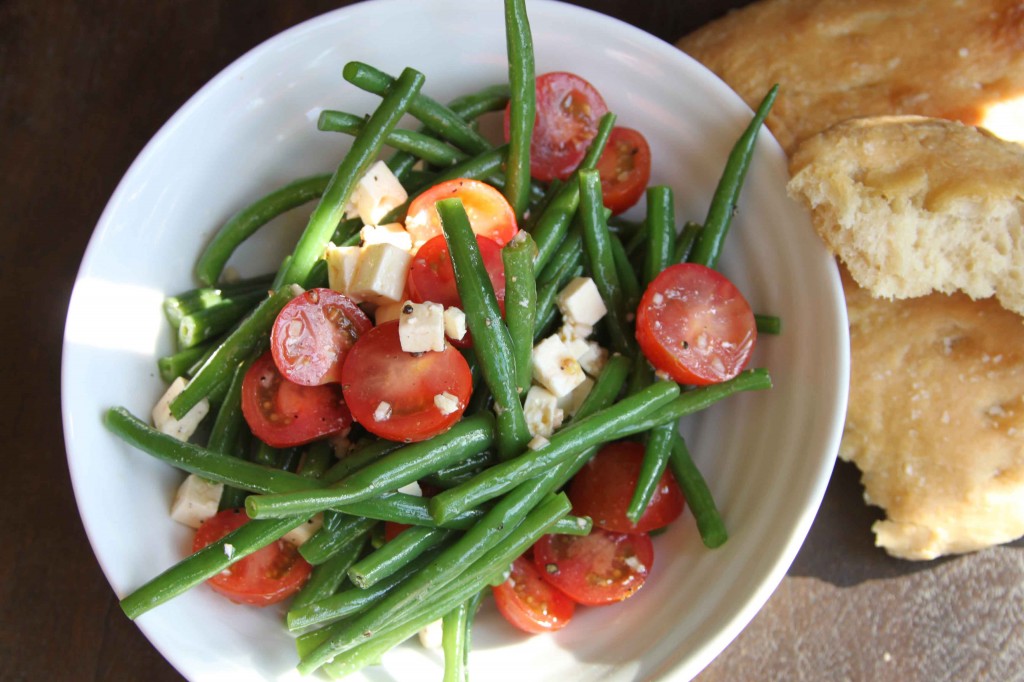 Green Beans with Tomatoes and Feta

Cook the beans until just tender.  Mix the oil, vinegar and garlic in a bowl with a little salt (remember the feta is salty) and pepper then add the beans and turn them well in the dressing, put in the tomatoes and feta and mix gently until just coated.  Taste, you may want to add a little more seasoning.  Serves 4.