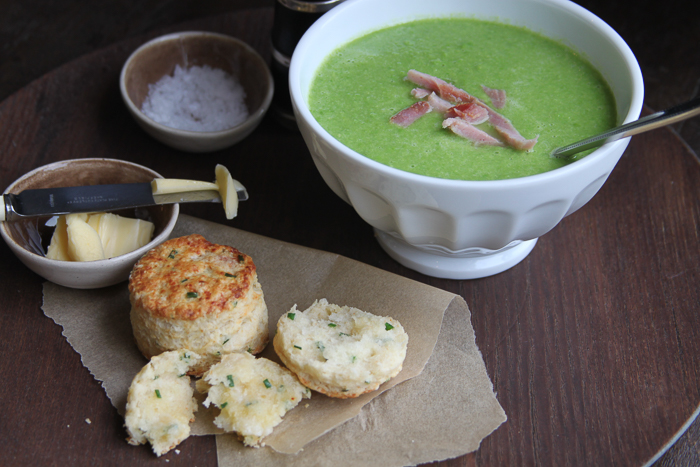 I love a bit of thrift, nothing more satisfying than using up bits and pieces that might otherwise find their way into the bin.   So it was with my pea soup here.  We had a baked ham for supper and whilst there wasn’t enough to make another supper for four there was a small chunk left plus the water I cooked it in.  I always intend to use this liquor for some useful purpose but must confess it often sits in the pan on the back of the hob until it has to be thrown away.  Today I was determined however and with the addition of a bag of frozen peas and a couple of spring onions sautéed in butter it has made a delicious soup, just the warming ticket for a breezy day.   You could add a swirl of cream, something I rarely turn down with soup, but here I’ve used a few little bits of the leftover ham.

Wanting to jazz this frugal lunch up a bit, but not wanting to go shopping I decided to make some scones.  There is always flour and cheese around and I happened to have bought some buttermilk the other day to make a cake with.  I split my usual scone recipe between cheese and chive to go with the soup and the other half sweet, sugar topped ones to greet the children with when they get back from school this afternoon.  The left over cheese scones will be filled with the last of the ham for their packed lunches tomorrow.  I hope this doesn’t sound hideously smug but – hurrah, everything used up and stretched further than I had anticipated.  Good stuff.

This is barely a recipe however,  I sautéed two chopped spring onions in a teaspoonful of butter until soft then added a 400g bag of frozen peas.  I added a litre of the leftover ham poaching liquor and heated until the peas were just cooked.  Whizzed with a hand held blender until smooth and served with some chopped ham.

I often have a carton of buttermilk in the fridge, it has a great shelf life and works a treat in many bakes or, of course, soda bread (Seedy Soda Bread, April 2013).  The recipe that follows is my usual (sweet) scone one.  As mentioned I split the recipe and added 60g of grated strong cheddar and a small bunch of chopped chives to one half.  To the other I added 40g golden caster sugar.  Both I brushed with milk before baking and sprinkled a little more sugar over the sweet ones.

1 carton buttermilk ( they are either 284 or 250ml, if the latter you may need an extra splash of milk)

Preheat the oven to 200.  Sift the flour and salt together and rub the butter into it until it resembles fine breadcrumbs.  Then add the sugar and buttermilk and mix together until it just holds as a dough but don’t handle it more than you have to.  Form into a round and pat or roll out until about one inch thick.  Cut out and put onto a floured baking sheet, brush with milk if you want and scatter over a little extra sugar.  Bake for 12-15 minutes until golden and well risen.