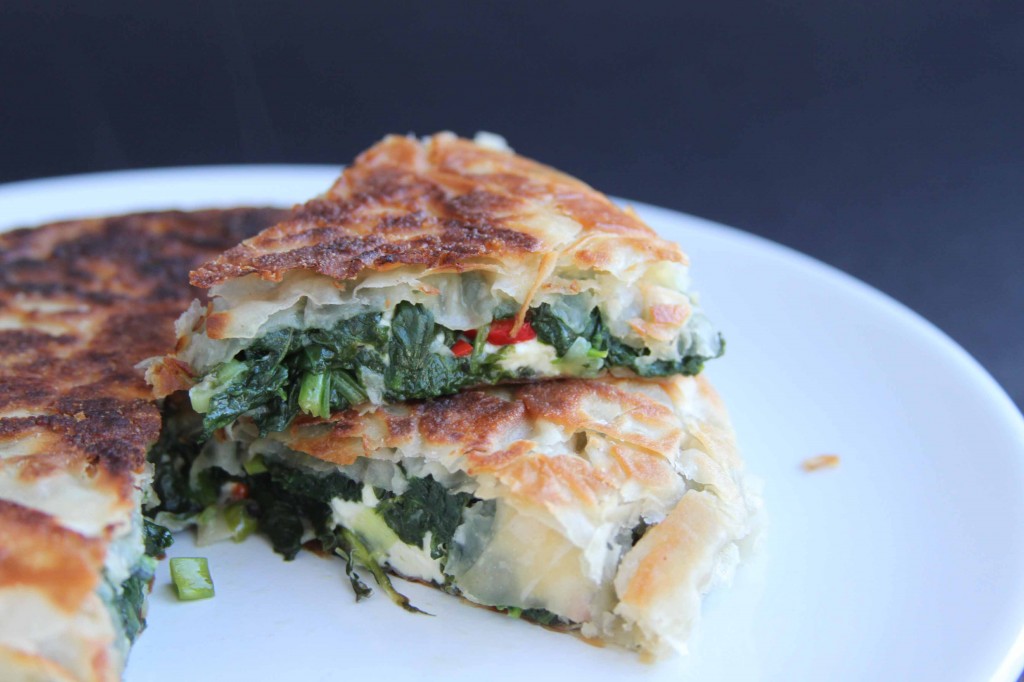 As you know in the run up to last Christmas I had pretty much packed my freezer in order than I might make it out of the kitchen from time to time!   On Christmas Eve a few things came out to defrost which fortunately made room for me to bung a couple of things in.  So we made lots of little sausage rolls with bought puff pastry and good sausages from the farm shop – fun to do with my children and a good way to keep them from staring (almost at fever pitch now) at the goodies under the Christmas tree.   Following that we made a buche de noel – again, a great way to keep little people occupied and straight forward enough too.  It was a little cracked but with a good fall of icing sugar snow and a robin sitting on top was the perfect way to finish lunch later that day, brought to the table with great pride by my children.

For that lunch we had a ham, so easy and such good value.  It simmered away gently whilst we got on with the sausage rolls and then I covered it in a mix of brown sugar and dijon mustard and popped it in the oven for half an hour.   I served it with red cabbage (from the freezer, of course) and my Firecracker Red Cabbage recipe earlier this month would be just the ticket, perhaps minus the chilli.  Plain boiled potatoes covered in a blanket of chopped parsley (a hint towards ham with parsley sauce) and a quickly rustled up Cumberland sauce, with orange juice, port, redcurrant jelly and stock all being around anyway.

That evening, Christmas Eve proper, we had a spicy, fragrant chickpea and mushroom curry which, you’ve guessed it had been lying in wait in the freezer for a week.  With rice and chutneys from the larder, bought naan and a quick raita this was simplicity itself and not only a meat free moment before the following day but also meant we could all eat the same thing including my veggie brother.  Followed by little mince pies (frozen!). 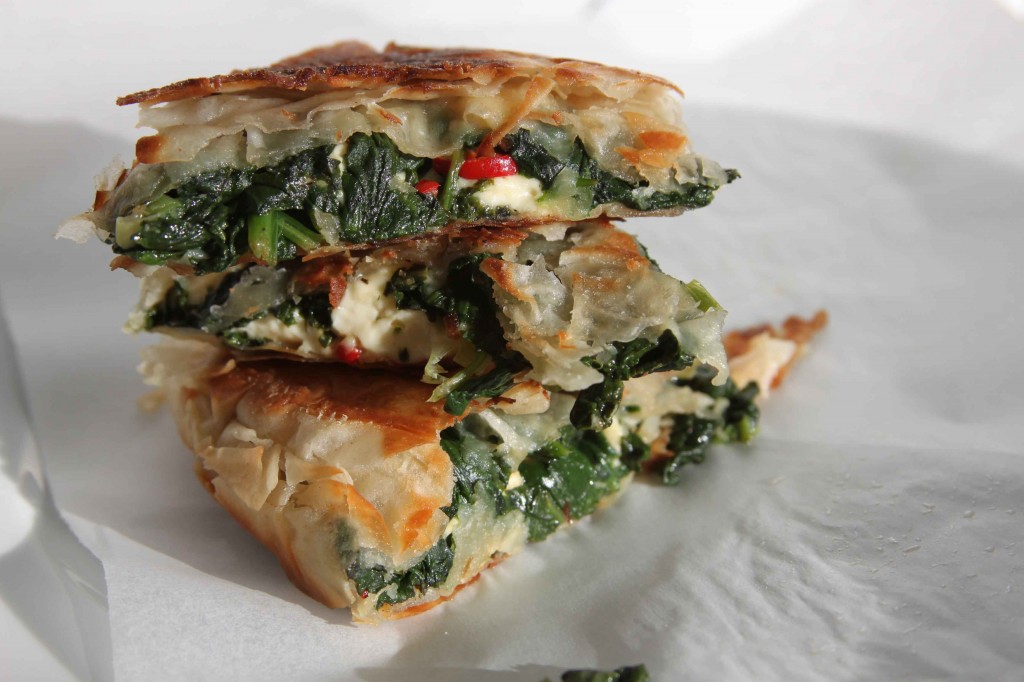 The Feta and Spinach filo parcel or tart you see in the photographs was what I made for same vegetarian brother for Christmas Day.  It may seem a little cross cultural with the trimmings that go alongside the turkey but I knew he would love it and I wanted him to have a real treat that day, the same as the rest of us.  Everyone wanted to try a little so just as well I had made a good size one, in fact one that my husband and I will happily have for lunch with a good crisp green salad alongside.

It is by no means an authentic Greek spanokopita but with the feta and greens is a nod in that direction.  I have added spring onions and either chopped red chilli – which gave it the perfect red, white and green of Christmas – or you could easily use a pinch of cayenne.  Now, this is very nearly the last time I will say it but….. I made this a few days before and froze it – thawed it that morning and reheated it in the same pan I made it in.  Crunchy crisp and delicious. 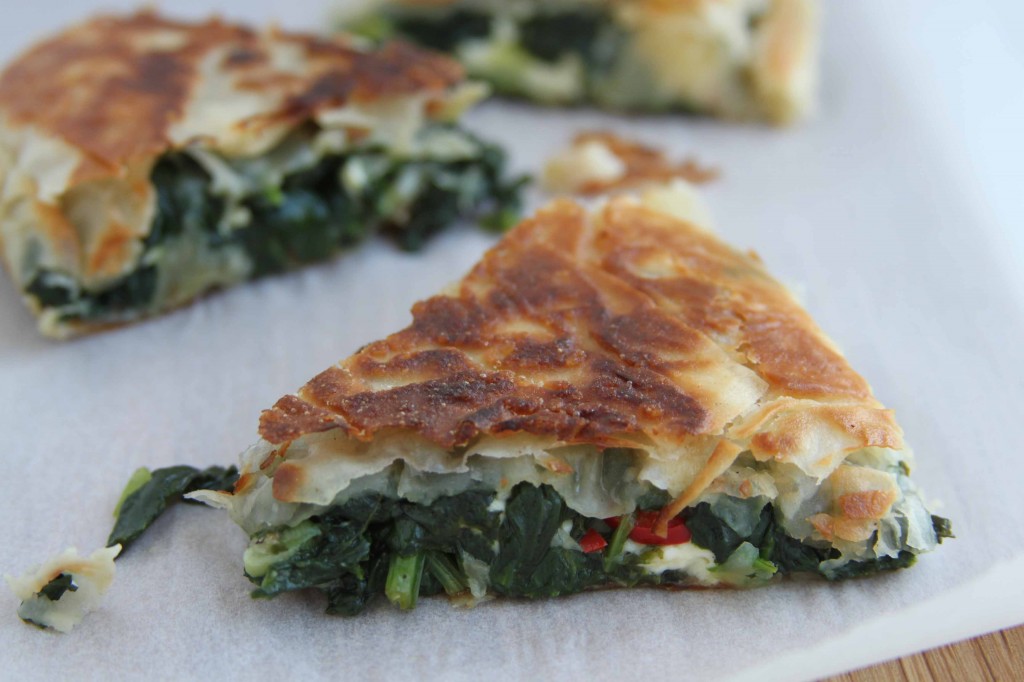 1/2 red chilli or a good pinch of cayenne

Olive oil for brushing, about a tablespoon

Brush the inside of a 20cm (roughly)  frying pan with oil and lay the sheets of filo in it, brushing each sheet with oil as you go, overlapping at angles to each other so the whole pan is covered with the surplus hanging over the edges.   Make sure all the water is squeezed out of the spinach and then chop it a little and mix with the sping onions, feta and chilli or cayenne.  Give a good grinding of pepper and a small pinch of salt – you do need a little salt for seasoning but go easy because the feta is of course salty.   Put the mix into the filo lined pan, pat it flat and then fold the overhanging sheets of filo over, brushing the top with oil.  Tuck in any extra bits until you have a neat circular package.  Put it on a gentle heat and cook for about 5-6 minutes until when you peek gently underneath the bottom is golden and crispy.  Turn it over by sliding onto a plate, or I find easier a flat pan lid (then you have a handle underneath) and gently slide back into the frying pan to cook the other side.  When this bottom is crispy and bronzed it is done.

As above, this served one on Christmas day (with a bit of sharing) but could serve two for lunch.  Or you could slice it once cooked, wrap it in foil and take it out on a picnic.  Finally, it makes a great party canapé, just cut your filo a little smaller and use a metal cupcake tin. Proceed as above but bake in the oven rather than on the hob.  With this I would be inclined to serve a mint spiked yogurt sauce for dipping.