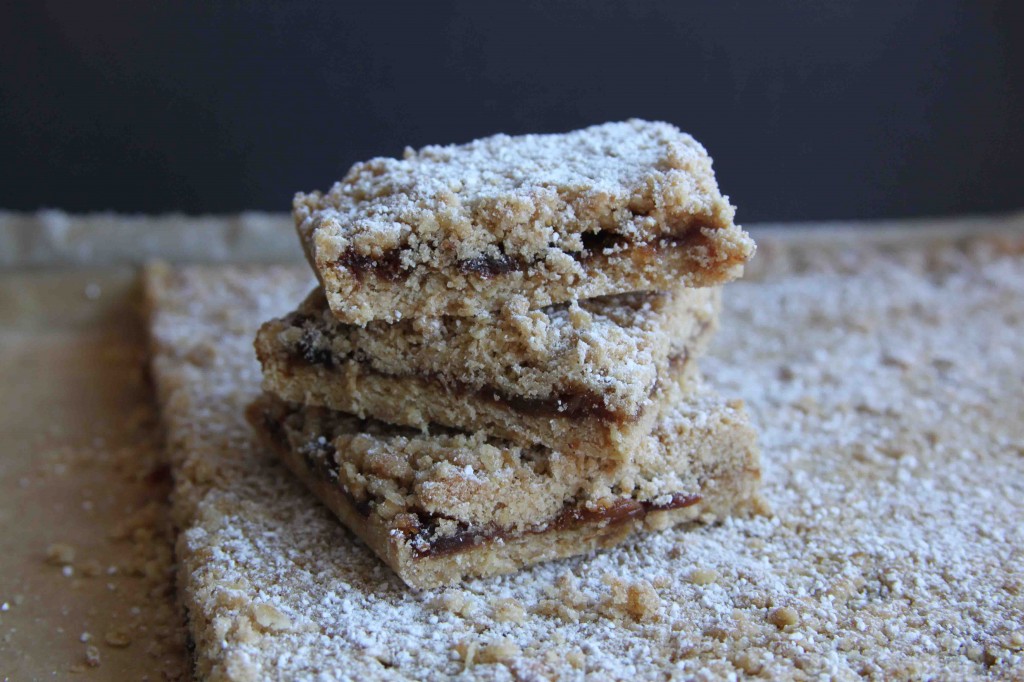 I often make something we imaginatively call Jammy Oaty Slice – can you guess what is in it?  Of course you can and I highly recommend it as a delicious tea time offering.  The other day I was looking at a tray of it cooling ready for scoffing and it reminded me of the mincemeat slice that used to adorn the bakers’ shelf at Christmas in Yorkshire.  Heavily dredged with icing sugar, it was completely white from the top and the layers were crisp and even (really!) in the way only a practised hand can accomplish.

So of course I had to have a go at making it myself.  Whilst I love mince pies, my immediate family (i.e. the ones I actually live with) don’t like anything with cooked raisins or dried fruit.   This means that if I make mince pies then I am the only one who will eat them unless we have friends over and when it comes to a Christmas cake…. Well, suffice it to say I ate all of the the last one which graced a tin in our house.  All of it and I made another in January because I had enjoyed it so much…..

These little squares are much safer then.  Rather than a huge cake winking at me from the corner I can safely eat one of these treasures with a cup of tea on a daily basis without having to book into the gym afterwards.   Like two layers of shortbread with mincemeat in between, somehow better than a traditional mince pie if that is not too shocking a statement? The oats add an extra element which is just right and of course go a good way towards balancing out the sugar and butter.  Heading for health food is what I say…. 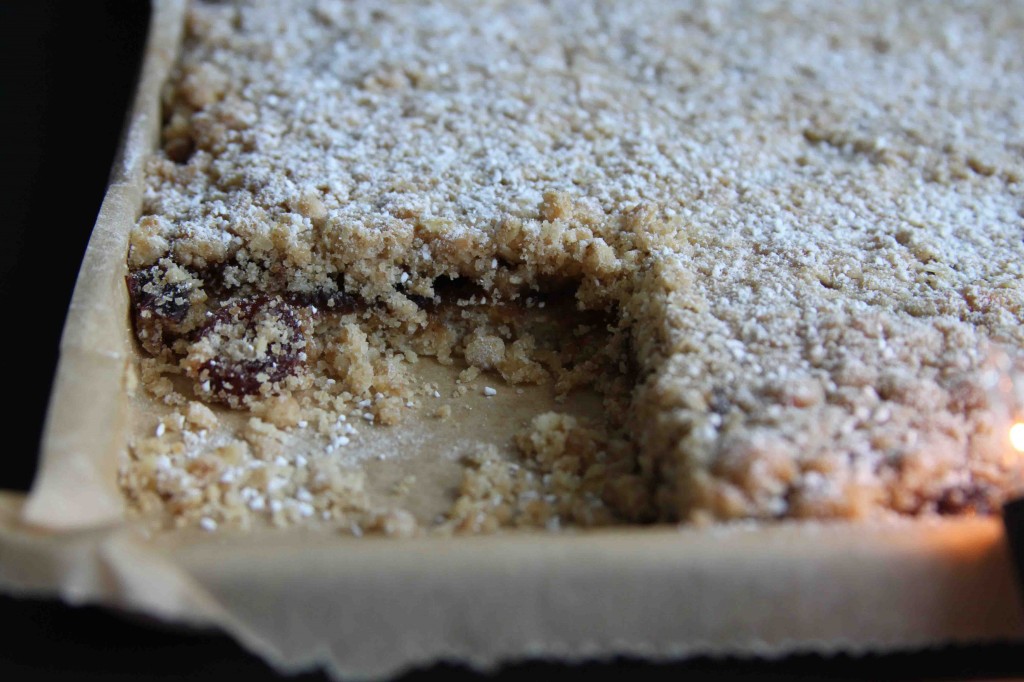 If you want to go for the original Jammy Oaty Slice then just replace the mincemeant with jam, I favour raspberry.  However, please do give them a go this Christmas, they are a million times easier than mince pies if you need to make a batch for a sale and are just delicious.

Preheat the oven to 180.  Line a tin of approximately 23cmx32cm  with baking parchment.  Whizz together the flour, oats, butter, sugar, baking powder and salt briefly in a food processor (you want it combined but not forming a ball of dough as it needs to be quite crumbly for the top layer).  Tip half of the mixture into the baking tin and press it to cover the base in an even layer.  Spread the mincemeat over this and then sprinkle the remainder of the mix evenly over the mincemeat and press it down gently.   Bake for 30-40 minutes until golden on top.  Remove from the oven and leave to cool completely before dusting with icing sugar and cutting into squares. 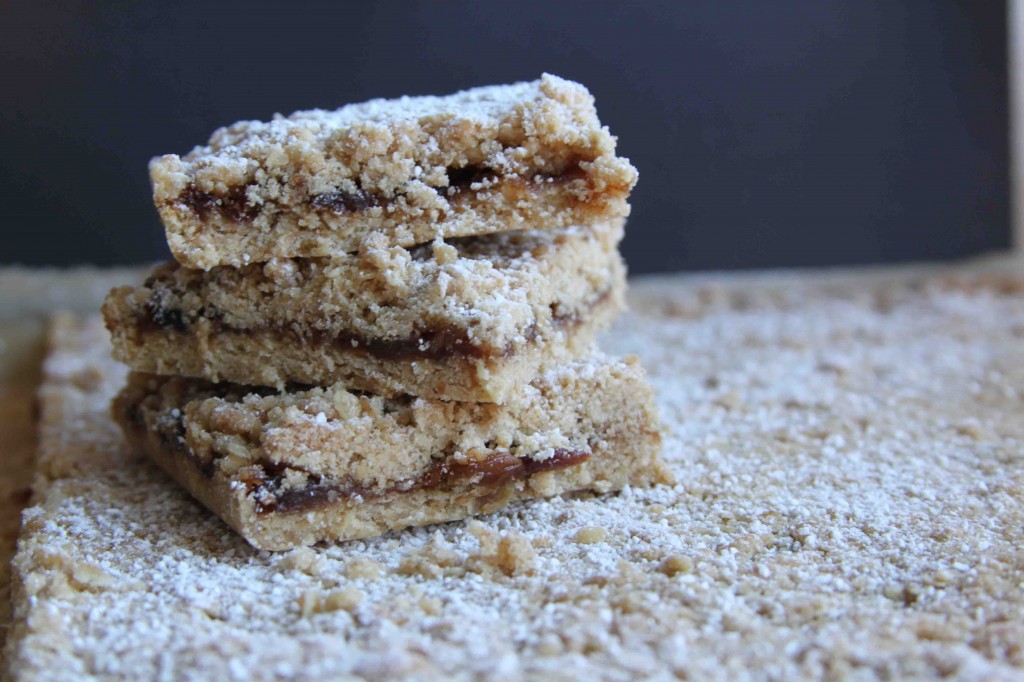 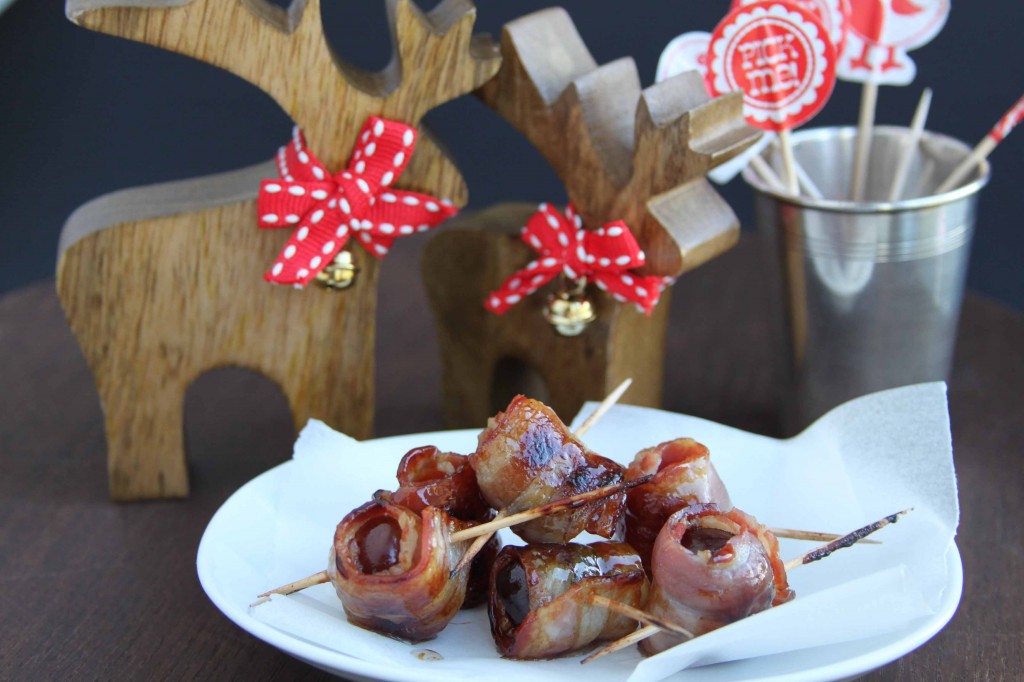 I read something recently about preparation for Christmas being over-rated.  Hhhm, I thought, not written by someone who has to squeeze the buying, wrapping, cooking and all other prep into an already busy life and actually wants to spend some of Christmas with their family!

So call me a swot but I do believe in a bit of list making and using the freezer where I can. Last year we had 10 here over Christmas (3 meals a day for 3 days plus a few extras) and I was so pleased (and relieved) with what I rustled up and stashed away beforehand.  Here are some of my tips of what worked and suggestions that might help you this year.

For Christmas Day I pre-prepared the roast potatoes.  King Edwards peeled, parboiled, given a good shaking to rough up the edges and then frozen.  I cooked them from frozen in hot vegetable oil (no goose fat, vegetarian present) and they were amazing, the best roasties and what a pleasure not to be peeling a hundredweight of potatoes and steaming myself over them before lunch.  We will be a far smaller gathering this year but I will still do these, not just to minimise work whilst my children are beside themselves with yuletide excitement but also because they were so crunchy and fluffy.  Highly recommended. 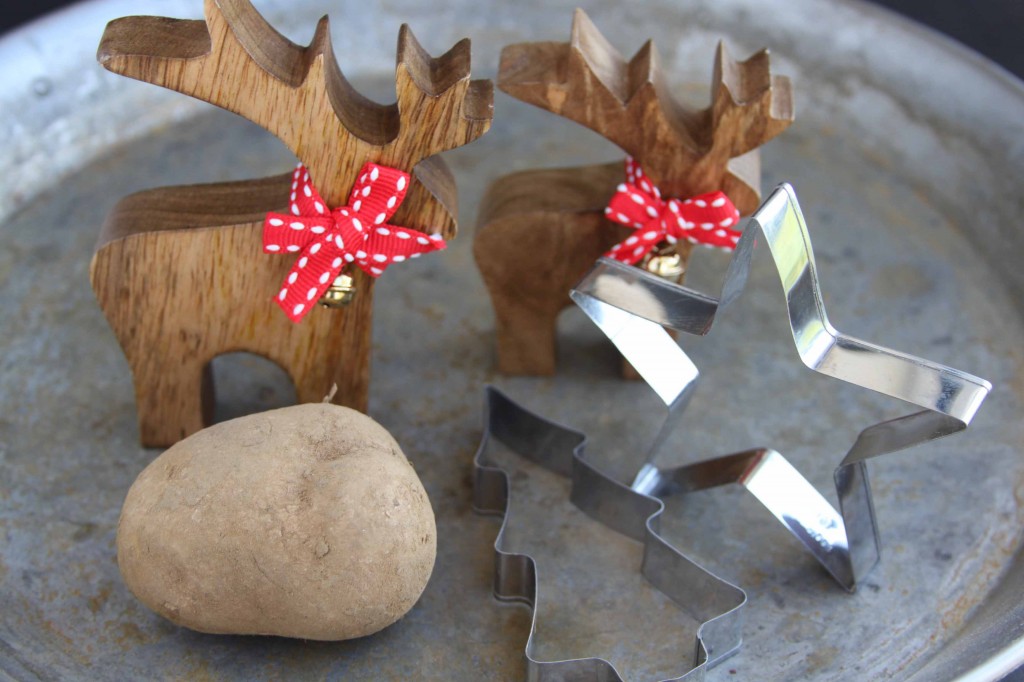 For the big day I also made stuffing, both a sausage and vegetarian one which were both then reheated in the foil containers they were frozen in and decanted into nice dishes for lunch.  I made two gravy bases which I froze the week before and they helped enormously to make a full flavoured gravy at the last minute without any hassle.   Cranberry sauce, pigs in blankets made and frozen, bread sauce too, I just added a bit of extra milk on reheating.

Now I know none of these things take long to make on their own but when you’ve got to do all of them at once (and find a saucepan for each one) it can be a headache.  Also, wouldn’t you rather see your family and friends unwrapping presents (which you’ve then got to build/play with etc) and perhaps enjoy a glass of champagne yourself….

I also made some little canapés which were great to have tucked away to be whipped out whenever a festive drink was in order.  Cheese gougeres, sausage rolls, courgette polpette, crunchy seeds (Things with Drinks, October 2012) cheese sables (December 2013) and these spiced cherries in bacon.

This might sound like the craziest recipe in the world and you may well raise your eyebrows at me but seriously give them a go.  They are sweet, savoury, tangy, salty juicy little bundles of deliciousness and so good with a cold glass of something.  On that note, if I could steer you towards my Sloe Vespa, the Christmas cocktail (December 2012), then all the better!

Once you’ve got over laughing at this recipe, get cracking on it now, the cherries only get better the longer they languish in the Worcester sauce.  Remember too that once the first lot of cherries are gone you can top up the tub with some more as the WS will be good for another batch (or pour the sauce into the next tub of cherries, if you see what I mean).

Streaky bacon, half a slice per cherry

Take the lid off the cherries and pour in Worcester sauce until the cherries are submerged. Put the life back on and keep in the fridge until you are going to use them – at least two weeks but a couple of months ahead is fine.  Preheat the oven to 180 and line a baking sheet with parchment.  Wrap a cherry in a half slice of bacon and secure with a cocktail stick.  Repeat with the rest of the cherries and bacon.  Cook for 15 minutes until the bacon is cooked and starting to caramelise with the sweet sticky juices.  Allow to cool for a few minutes and then serve.  Makes around 24.

I first posted these tips in November 2013 but I thought now a useful time to offer them again plus you need to get those cherries soaking!