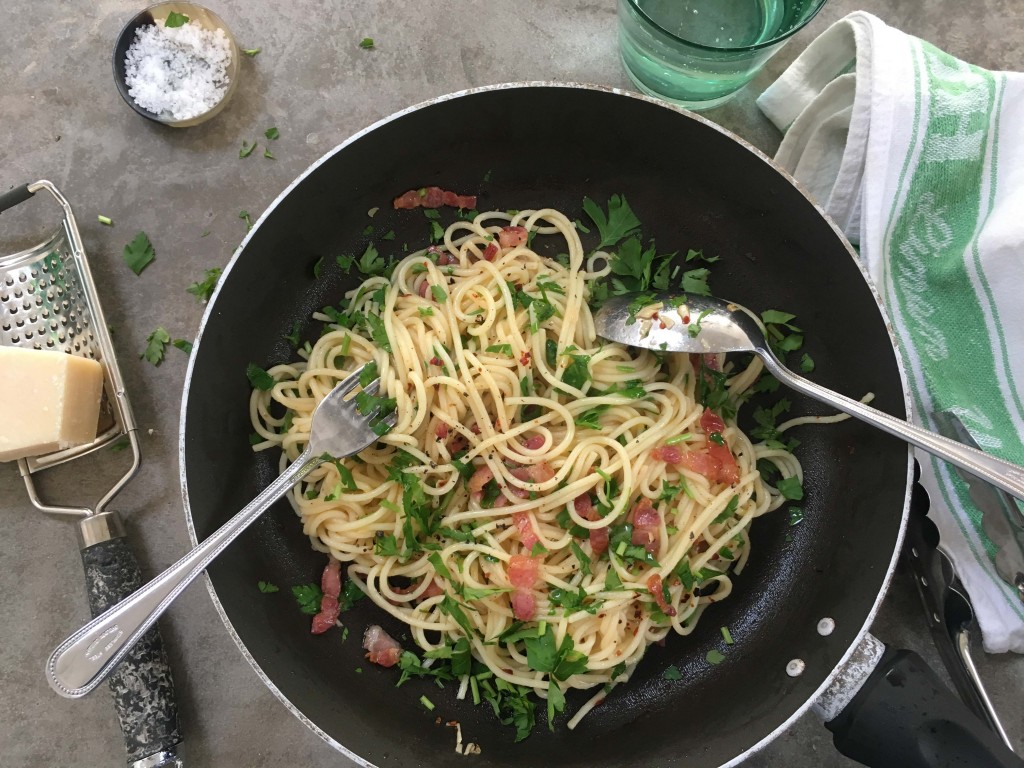 We have had masses of building work done over the summer, hence my silence on these pages.  Some days I had a kitchen to use, other days not so much.  Once the Aga was decommissioned I moved onto a two ring gas hob (no oven) and once that was a goner it was braais or picnics.  There have certainly been some stressful moments and I have deposited more money in the swear box than I care to think about.  My poor husband and children have had to put up with a lot of unusual suppers from a rather mad-eyed cook but it was worth it and we now have a fabulous new kitchen.

The thing about being put on the spot kit wise is that it really focuses the mind.  If all the gadgetry has been boxed up (or just covered in dust) and there is only a pan to hand then one must make do.  One such recipe that came into play was this pasta with bacon, garlic, chilli and parsley.  Comprising of store cupboard and garden ingredients this can be reliably whipped up with the minimum of equipment, time or energy.  On one occasion I also added a pile of halved cherry tomatoes because I had some that needed using up.  It is certainly just as good without and I wouldn’t use tasteless winter (or jetset) tomatoes for the sake of it.

I highly recommend making this whether you are enjoying building works or not – it is cheap, very cheerful and everyone, particularly the children love it – what could be better (apart from a new kitchen).

As with many of my recipes this is open to interpretation – if you adore bacon then add more;  if your children can’t bear chilli then leave it out.  The parsley is very much an ingredient here rather than merely a garnish but if the green stuff horrifies your little ones……

300g pasta of your choice

Get your pasta cooking in a large pan of generously salted water.   Put a tablespoon of oil in a large frying pan and snip (I find scissors easiest here) the bacon into it.  Cook until just turning crispy then add the garlic and chilli, stir it around over a gentle heat ensuring the garlic doesn’t brown.  When the pasta is done, drain it retaining a little of the cooking water.  Tumble the pasta into the frying pan and mix well with the bacon, garlic and chilli adding a splash or two of cooking water to keep the whole thing quite slippery.  Chop the parsley over the top, season well and serve with parmesan if you like.  This amount is enough for two adults and two children.