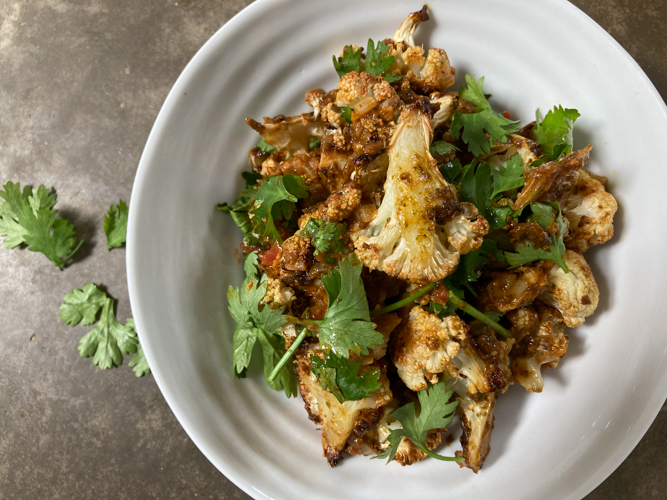 This is essentially a riff on my Chermoula Prawns (April 2020) but with cauliflower.  As such you probably don’t need a recipe but I wanted to draw your attention to it because I make it so much (for that also read eat it and love it so much).   The cauliflower gets those delectable crispy bronzed edges in the oven and these combined with the powerhouse of flavour that is chermoula means this is an absolute winner.   We’ll have this for lunch, sometimes on its own but more often with an assembly of other dishes – this mezze/tapas type eating being a favourite of ours and a good way to eat more veg.   It also works brilliantly in packed lunches which now feature in my weekly cook as we are back at school and work.   You can cut the cauliflower into trendy steaks if you want but I usually do florets – that it is also vegetarian/vegan is simply a bonus.

Incidentally I cook fish a lot with this chermoula as well – very much in the same way as the  chermoula prawns and it perks up frozen fish, which I found myself using during lockdown, a treat.   This makes a supper that feels both light and clean but full of flavour and hugely satisfying.  Whatever you cook it with I encourage you to whizz up a batch – bright with herbs and citrus, underlying spice and a zap of heat – it really is good.

When I came up with the chermoula prawns during lockdown I had to use ground cumin and coriander (see below) as this is all we had.  Now I have a supply of the whole seeds I tend to use these, partly because I love the smell when bashing them in the mortar but also because their flavour is more vibrant.  If you choose the whole seeds simply warm them in a dry pan until fragrant then crush with a pestle and mortar and proceed.

I cauliflower, separated into small florets

Preheat the oven to 200.  Put the cauliflower onto a large baking pan, turn in one of the tablespoons of oil, sprinkle with salt and cook for 20 minutes or so until just soft and beginning to brown on the edges.  Heat the other tablespoon of oil in a large frying pan and cook the onion gently until soft but not coloured.  Whizz the remaining ingredients apart from the tomatoes in a small food processor, with a hand held blender or chop by hand.   Mix a tablespoon of the paste with the cauliflower and return to the oven for 5-10 minutes and add the remaining paste to the onions along with the tomatoes and a good splash of water.  Once the cauliflower has had its additional time either add to the sauce or dollop the sauce over and serve sprinkled with the extra coriander.  This would serve 2 with rice and was actually enough for the 4 of us as a side for lunch.