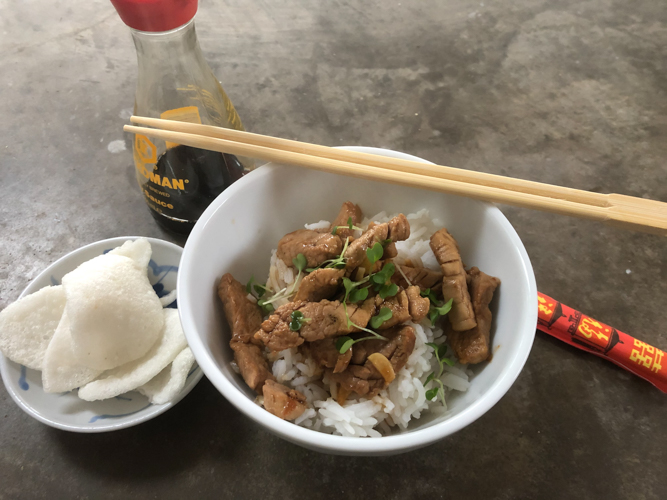 Whilst I am all for slow cooked braises, blipping away in the oven for hassle free hours to become deeply savoury and yielding, there are times when we need supper in a hurry.  There are many such recipes on these pages* and here is another to add to your repertoire.  Combining those magical sweet, salty spiced flavours from the East, this is lip smacking, satisfying and speedy to boot.

I use pork fillet here which, being lean, lends itself perfectly to a quick stir fry but you could use chicken if you prefer.  I would favour (as ever) skinless thighs over breast though.  For a veggie option I would use big mushrooms sliced and add the cabbage mentioned below to the pan with the mushrooms and sauce.  Apart from the meat or vegetables, this is but a quick rifle around the cupboard plus some ginger and garlic.

For greens I have taken to stir frying some chopped hispi/sweetheart cabbage with either a few bashed sichuan peppercorns or garlic, ginger and chilli.   It cooks in no time and works well with the hoi sin pork, alternatively try the greens with garlic and soy (October 2017).

My children like this served with noodles which I stir into the wok at the end to combine them with the pork and sauce.  I prefer it with rice but, as ever, its up to you.

500g pork loin, cut into pieces the size of your little finger

Chopped coriander (optional, use it if you have some)

Noodles or rice to serve

Put the ginger, garlic, hoi sin, sriracha, water and soy into a bowl and give it a good stir.  Heat the oil in a wok or large frying pan and over a high heat add the pork, leave for a minute to seal then stir fry until coloured on all sides.  Add the sauce and stir for a couple of minutes until the pork is cooked and well coated by sauce.  Don’t cook it for too long or the sauce will reduce too much and become salty.  If you want a little more sauce add a further splash of water.  Serve with noodles or rice and sprinkle with some chopped coriander if you have some.  Enough for two adults and two children. 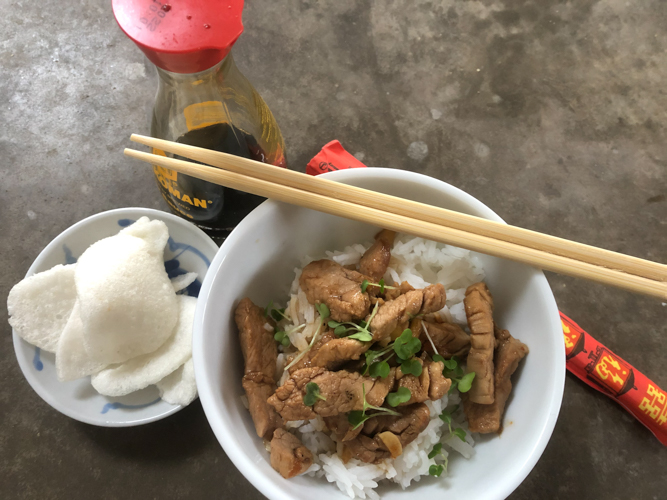 *Some other top speedy suppers are Claypot chicken (May 2013), Teriyaki chilli salmon (April 2019), Salmon with pickled cucumber (May 2015), Kale, mushrooms and chilli on toast (January 2013), Orzo with bacon, tomato and cream sauce (June 2015), Savoy cabbage with bacon and creme fraiche (February 2015) and those Greens with garlic and soy (October 2017) which I happily have with a pile of rice for a meat free supper – to name but a few.